Synopsis:
A couple on a camping trip get more than they bargained for when they stray from the path and disturb a group of creatures in the woods. 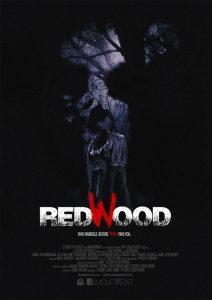 The premise for Redwood is a familiar one as it follows couple Josh (Mike Beckingham) and Beth (Tatjana Inez Nardone) as they try to broaden their horizons by spending a little time outdoors. What makes this film a little bit different, however, comes with Josh’s leukaemia diagnosis. The couple aren’t trying to get over infidelity or the death of a child; they’re spending time together while they have the chance.

Although Beth is keen for her boyfriend to stay positive but realistic, Josh is more concerned with cracking jokes and seeing the lighter side of his illness. Redwood has a little trouble swinging between different tones; sometimes the story is awash with moments of comedy before shifting back to being serious with a jolt. The tonal shifts are occasionally awkward and the poorly-timed addition of emotion sometimes feels shoe-horned in. Despite trying to get the balance right between its comedy and emotive scenes, Redwood does suffer from feeling uneven at times.

Some of Redwood’s dialogue is a little clunky and the film probably could have done with a script re-writer, just to tighten up some of its more lacking moments of conversation. It’s difficult to believe in the pair’s relationship and, in the beginning, I was surprised to learn they weren’t brother and sister. There’s no real romance between the two and although it’s refreshing to see a horror film not flaunt or lead with its romantic side, Redwood’s couple definitely need a little more love between them to convince us of their difficult situation. 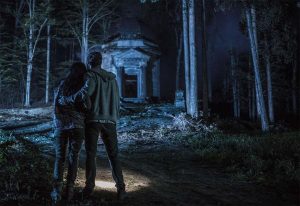 For all its moments of distraught emotion and its grounding in a very harsh reality, one that many will associate with, Redwood delivers some fantastic moments of terror to accompany its sentimentality. The vampiric monsters that dominate the woodland are brilliantly realised and bear a strong resemblance to the creatures in The Descent. Director Tom Paton is confident in his monsters and does not shy away from giving his audiences a good look at them. For a low-budget feature this is fantastic, because far too many indie horrors lack the confidence to showcase their ghosts, ghouls and monstrous creations. Either that or we’re treated to poor CGI which immediately plucks you from the film and reminds you that practical effects are always better.

Paton certainly knows how to deliver the frights and even the more obvious jump scares are impressive, thanks to the overwhelming sense of dread and mystery that acts like a chokehold on the audience. Simple cross-cuts bring the fear and Redwood wholly exploits the beauty and eerie elements of its forest locations, as well as the confined space of a tent. The to-and-fro between the large open space of the woodland and the limited area of the tent and campsite will keep you on your toes, ensuring that you’re never quite sure what’s going to happen next. 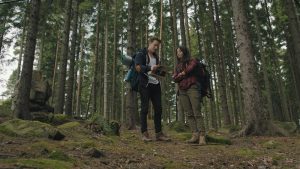 Redwood may have an overall familiar concept, but by the end, I was left gawping. The finale becomes a neat culmination of the film’s concern with horror and emotion, truly showcasing the thin line between the two opposing feelings. For all its flaws, Redwood manages to tie its story in a suitable little bow, proving the film to be a taut and scary indie gem. One to watch? Certainly.