Vampires are like cockroaches; they’re sexy and they’re scared of the light. Or that there are a million of them and each one has a story to tell.  Stories of falling in love in the woods of the Northwest, stories about female sexuality, about the dangers of blood borne pathogens, running the mafia, destroying an Alaskan town, and attempting to murder our 16th president. With Redneck, we can now include ‘good ol’ boys’ of the American South into the lineup. Focusing on a vampire family forced into hiding in Texas, the comic plays with centuries of blood-sucking tropes while making the vampires sympathetic protagonists that you can’t help but root for. It’s a fun addition to the genre without it going down the same road as hundreds of other works and forces the reader to see the other side of the vampire epidemic.

The comic opens up on the Bowman clan, a family of vampires that have managed to live more-or-less out of the public eye for a couple hundred years. Surviving on cows blood and whatever money they make from their BBQ restaurant, life is seemingly ideal, if not mind-numbingly boring. Refusing to stay one more night trapped on their property, three of the youngest brothers (young being a relative term), decide to visit the town to the objections of Grandpa Bowman. Grandpa decides to send their Uncle to check on them and wouldn’t you know it, trouble had already started brewing the moment he shows up. Before he knows it, things start go haywire and suddenly, their boring life has gotten a lot more dangerous.

The great thing about Redneck is that the characters aren’t these beautiful, majestic creatures that seduce the living and live in gothic splendour. Hell, they’re not even blood thirsty monsters that descend murderously on a town like some kind of ghoulish Spanish Inquisition. They’re just people trying to survive. They know they got these powers that put them head and shoulders above humans, but instead of using it to get ahead, they just want to live a normal life. It’s a bit like the X-Men really. Honestly, so many vampire works try to make them unsympathetic (or very pathetic, depending on what your reading), but Redneck allows the characters to be very relatable, which only further pushes the story. Even their banter is very natural, filled with a soft southern drawl that’s very indicative of the location and the amount research the creators put into the work. 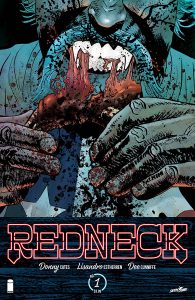 Speaking of creators, the writer Donny Cates, is no stranger when it comes to Southern Horror. Currently also penning God Country, about a man who was secretly housing a god in his body, Redneck expands on the Texas countryside horror that he has started exploring. Personally, this reviewer is a bigger fan of Redneck than God Country, as I found that the previous one lacked any proper character development, so it’s with much relief to find that Redneck has made improvement on the character end while keeping the dark fantasy/horror undertones that made Cates so popular. Lisandro Estherren’s art works well with the story and is in that sweet spot that captures the small spress scratch style and touches it up with a studied illustrator hand. It’s a great combination of vision and talent with only a few flubs in terms of proper vanishing point technique, but that’s just splitting hairs, it’s a solid work.

Look out for Redneck #1 from Image Comics on shelves April 19th!