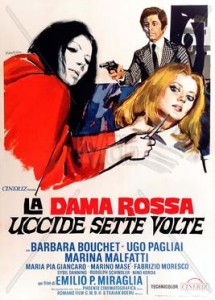 Synopsis:
A series of murders links fashion photographer Kitty Wildenbruck (Barbara Bouchet) to a curse on her family bloodline and a devilish spectre known as The Red Queen.

After his progressive giallo debut The Night Evelyn Came Out Of The Grave, director Emilio Miraglia returns to the genre with this energised spiritual “follow-up” which retains the gothic elements of its predecessor (grand castle/ reading of the will) but within a more conventional (yet intricate) plot structure, blending murder/ mystery facets with stalk and slash tropes.

Following the death of their grandfather Tobias Wildenbruck (Rudolf Schundlur/ Chris MacNeil’s servant, Karl, in The Exorcist), Kitty and her sister Franziska (Marina Malfatti) are announced as heirs to the family fortune but the inheritance is delayed due to the mysterious absence of younger sister Evelyn who is thought to be living in America. A spate of killings soon occur, friends of Kitty and Franziska are slain and the legend of the Wildenbruck curse grows ever more tangible along with the possibility that Evelyn could be the killer. 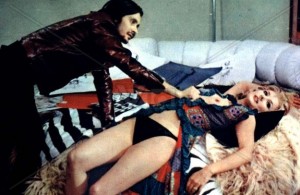 Miraglia’s second (and only other) giallo has a more ingeniously woven and compound plot-line than The Night Evelyn Came Out Of The Grave. Enhanced suspense and kill scenes interlaced with chic, kaleidoscopic-shot fashion photo shoots make the film feel more like a classic giallo than the haunted, complex character drama of TNECOOTG. A classic “who dunnit?” structure adorns the expertly crafted, claret spouting death scenes while a wide array of supporting characters augment the story with their intricate sub-plots while reinforcing an air of mystery.

Ugo Pagliai plays Kitty’s lover (and work colleague) Martin Hoffman as a catalogue cad while his secretary Lulu Palm (Sybil Danning) is the alluring, personified plot deviation, sauntering scantily clad and promiscuous through narrative strands. Hoffmann’s schizophrenic ex-wife is also a critical pawn but it’s the creepy Red Queen who’s the more memorable figure: slithering through shadows in her red cape like a spectre while cackling under darkness with the might to elicit night terrors. 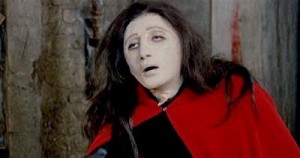 The “Evelyn” in The Red Queen Kills Seven Times is nothing to do with the title character in The Night Evelyn Came Out of the Grave but remains a potent antagonist and (as Kim Newman notes in the audio commentary) could have potentially become an iconic horror figure if the film had been granted a US remake in the 1980s, as part of the masked killer/ slasher subgenre. It is unknown for the majority as to whether or not the Red Queen is a supernatural being or a person adopting her guise, which contributes to the tension and terror.

A distorted music box/ pop score by Bruno Nicolai infuses a haunted nursery air while red herrings, rats in a sewer, spats of madness, a blackmail sub-plot, warped dream sequences and a triple-twisted ending goes some way to make TRQKST an exceptional, multifaceted giallo with decent effects and imaginative death scenes. The fence spike piercing and stabbed hand blood eruption are both outstanding despite the blood slightly looking like cold tomato soup (no steam).

TRQKST is by far one of the better giallo films this side of Deep Red, with which (as Alan Jones notes in the audio commentary) it also shares parallels. TRQKST (AKA The Lady in Red Kills Seven Times), is the second disc in Arrow Video’s Killer Dames box-set and remains a must for genre aficionados and film fans in general. Despite some quivering performances and occasionally juddering plot swerves, it’s a powerful, enrapturing, trend-setting fable; a near blood-shot, shimmering giallo classic with deep crimson visuals, surreptitious plotting and a clandestine sting in its tail. 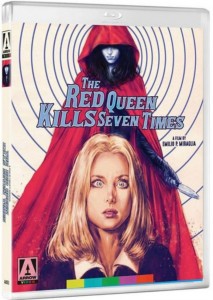 Extras include: an excellent audio commentary by writers/ genre specialists Alan Jones and Kim Newman, a short film analysis by Jake West entitled “The Red Reign” in which critic Stephen Thrower dissects and discusses TRQKST, relaying production morsels, visual parallels, how TRQKST was released with novelty blood-red popcorn in the US and an insight into composer Bruno Nicolai: a former tutor to Ennio Morricone. “Life of Lulu” is a recently filmed interview with actress Sybil Danning, who looks remarkably younger now than she did in TRQKST, forty four years ago! Probably all that clean living. Danning discusses her early industry days, how she got into acting through modelling in Austria and her memories of filming TRQKST.

Also included is a brief alternative opening with a bizarre date countdown and four archival features including “Dead a Porter” in which Production Designer Lorenzo Baraldi relays memories of the Rome and Germany shoot. “Round up the Usual Suspects” is an interview with actor Marino Mase (who plays the police inspector) discussing the Miraglia’s directing technique and what it was like working on location while his wife was pregnant with their first child. “If I Met Emilio Miraglia today” includes snippets from several cast interviews from both of Miraglia’s giallo films. Finally “My favourite films” is a very brief interview with Barbara Bouchet (Kitty).