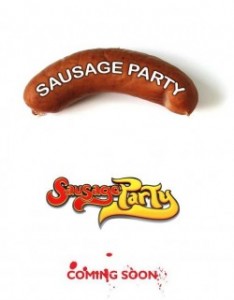 The first red-band trailer has been released for the first r-rated CG animated movie from directors Greg Tiernan and Conrad Vernon (Monsters vs Aliens) and it’s horrifyingly brilliant. It may not be a horror film in the traditional sense, but there is definitely something horrifying in hearing an animated sausage yell, “They’re eating fucking children!”

Sausage Party recently screened at the SXSW festival and has been met with overwhelming positivity. Many have praised the film for its raunchy humour and determination to push the boundaries of animation to its very limits.

The film follows a sausage who leads his foodie friends on a mission to discover the truth of their existence, when they discover they are not ‘chosen’ for the ‘eternity’ they had hoped. They are, in fact, destined to be eaten.

Check out the foul-mouthed and hilariously fun trailer below; never has grating cheese and chopping a lettuce been so violent. Get ready for Sausage Party when hits the big screen this summer on 12th August 2016.