Reboot of Cube is Put on the Back Burner

If you were looking forward to the remake of 1997’s Cube then we have sad news for you. When speaking in a recent interview, the film’s screenwriter Jon Spaihts (Prometheus) said that the film has been put on hold. He isn’t even sure if Saman Kesh is still on-board to direct.

“I have been involved with it. I think it’s resting right now as we look for a new creative direction, but we still are inspired by the vision of that original, independent, high-concept film. With any luck, we’ll still bring a new iteration of that story to light”. 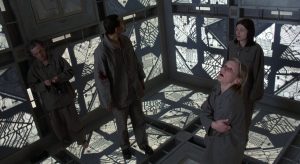 We weren’t too keen on a reboot of The Cube, because the original still stands up wonderfully today. The concept itself is fantastic, with films like Saw and its sequels unquestionably taking inspiration from its focus on strangers being forced to survive terrifying tasks in each section of the cube.

Keep your eyes peeled for more about the potential new Cube, but don’t hold your breath or expect it to arrive in the near future.