Netflix has ordered a second helping of their comedy-horror series Santa Clarita Diet, which followed Drew Barrymore’s thirst for flesh. We loved the show and thought it was an appealing combination of gory horror and hilarious comedy, so are excited to see more from the normal family with an abnormal secret. 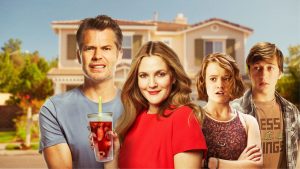 Synopsis:
Joel (Timothy Olyphant) and Sheila (Drew Barrymore) are husband and wife realtors leading vaguely discontented lives in the L.A. suburb of Santa Clarita with their teenaged daughter Abby (Liv Hewson), until Sheila goes through a dramatic change sending their lives down a road of death and destruction…but in a good way.

The first season of Santa Clarita diet is currently on Netflix, so you have plenty of time before S2 to catch up before it is released in 2018. Check out the light-hearted announcement video from Netflix below.