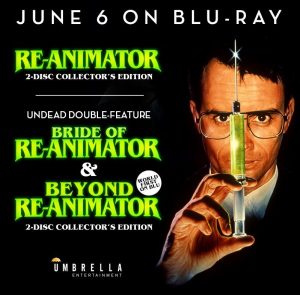 As revealed by the company on Wednesday, Umbrella Entertainment will be releasing all three Re-Animator films on Blu-ray in June.

Stuart Gordon left an indelible mark on modern horror with his beloved 1985 splatter comedy, which starred Jeffrey Combs as Herbert West, a promising medical student who embarks on ever more depraved experiments in bringing the dead back to life. It was followed in 1989 by Bride of Re-Animator, directed by Gordon’s longtime producer Brian Yuzna, who also later directed Beyond Re-Animator in 2003.

Re-Animator will come as a 2-disc collector’s edition, with Bride and Beyond in their own 2-disc set. This will mark the first time the relatively unsung brilliance of Beyond Re-Animator has been released on Blu, and it’s no doubt going to look great.