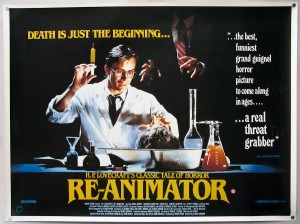 Synopsis:
After learning all he can at a Swiss medical school, leaving gruesome experimentation in his wake, Herbert West has enrolled at Miskatonic Medical School with plans to perfect his research into restoring life to the dead. With the help of his colleague and room mate, Dan, West manages to bring back Dan’s cat and the two set their sights on the school’s morgue. Unfortunately the Dean is disgusted by their experiments and Dr Hill wants to claim it (and Dan’s girlfriend, Megan) as his own. Can West bring the dead back to life, and evade Dr Hill?

The works of HP Lovecraft have been the inspiration for countless horror, science fiction and fantasy creations, from Mike Mignola’s Hellboy comics, to Nintendo Gamecube survival horror game, Eternal Darkness. While we can only wonder how Lovecraft might have reacted to his eldritch monsters such as Cthulhu being turned into cuddly toys and wooly hats on Etsy, I’d like to believe he’d approve of Stuart Gordon’s Re-Animator. The adaptation of Lovecraft’s “Herbert West – Reanimator” marked the first entry into Gordon’s Lovecraftian Cinema, including films such as From Beyond and returning to the tale of Herbert West with Bride of Re-Animator.While the original short story version has Lovecraft’s ever-serious tone, Gordon lightens the mood with some very dark humour. While the original tale is full of gruesome medical experimentation and grave-robbing, Gordon mixes in visceral gore, sex, and turns Lovecraft’s Herbert West who is similar to Victor Frankenstein with his hubris, into a fan-favourite anti-hero. West is a smug, self-righteous little ass-hole, but you can’t help but be on his side, a testament to the performance by Jeffrey Combs. Also the relationship between Dan (Bruce Abbott) and West cements their appeal, Dan is easily lead down the re-animation rabbit hole by West and the audience can feel that as we live through Dan. Dan, who is originally the unnamed narrator of the story, the Watson to West’s Sherlock Holmes. It is also through Dan that we are introduced to Megan Halsey, played by scream queen Barbara Crampton. Crampton lives in infamy due to Re-Animator’s most shocking scene and it’s impressive that she was able to embrace it and thrive rather than letting that gruesome scene end her career. 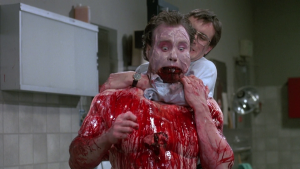 Gordon’s version of the Re-Animator tale modernises the text, transplanting it from it’s early 1900s setting into the modern 1980s and works almost seamlessly. While the original story takes place over the entire medical career of Herbert West, including time spent during the first world war, the movie manages to compact it down into a quick series of ever-gorier experiments. The only factor that I don’t think transferred well is through the character of dean of Miskatonic Medical School, Dr Allan Halsey. While he remains the puritanical pain in the arse, impeding West’s experiments (although that work is shared out with Dr Hill), it is heavy-handed in it’s delivery as Halsey expels West for the sheer mention of his experiments and suspends Dan for being involved (although it might also have something to do with Dan hooking up with Halsey’s daughter). Halsey’s contribution in the film is more important once he’s undergone one of West’s experiments, another element of the original story that the film stays true to.

Having previously mentioned Dr Hill, he is probably the biggest change to the story with the exception of Megan’s presence. He is the main antagonist in the film, although the character he is based on is only a small but important character in the original story. Gordon takes that bare-bones character and fleshes him out with his interactions with West, building a rivalry that makes him all the more monstrous when he becomes something less human. Certain aspects of the character that were played for scares in the original text, for example his severed head being replaced by a wax head, are played for laughs in the film, the film’s dark humour saves this from becoming a campy horror film that would leave it feeling dated. 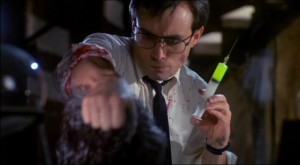 Thirty one years since it’s release and Re-Animator is still as fun and fresh as it’s every been and while the increased appreciation of HP Lovecraft’s work has helped spread it’s cult film appeal, it’s still maybe not well known enough. I’d love to see this film as well recognised as the 80s slasher franchises, Herbert West should be as well known as Pinhead and Leatherface in the general public, but I can remain satisfied in it’s appreciation by the hardcore horror fans. I definitely feel that if Lovecraft was around today, he’d love what Stuart Gordon has done with Herbert West, although if they could bring back the boxing death and the battlefield ragdoll corpse experimentations maybe we could use some more Re-Animator (We can always use more Re-Animator.)