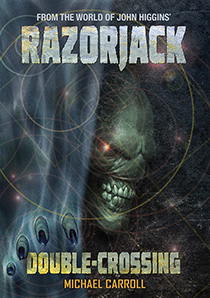 Razorjack was, and is, a graphic novel written and illustrated by comic’s legend John Higgins. He of Watchmen, Killing Joke, Judge Dredd (and many more) fame. The graphic novel was a fun and visceral horror tale that introduced the concept and world of Razorjack.

Razorjack is the fearsome, demon leader of a terrifying alternate dimension, known as the Twist, that she rules over with a ruthless hand. She’s helped in this by her army of genetically modified female warriors – the Twist Bitches. The Graphic Novel is tremendous fun, but there is also a short story included in the collection. One that hints at a wider world beyond the initial tale.

And this is where Double-Crossing comes in.

Michael Carroll is best known for his YA series of novels The New Heroes (The Quantum Prophecy in the US) and as a regular writer on Judge Dredd. So the question is, can a writer more known for YA work step up to the world of horror writing?

From the off it is clear that he can.

The story concerns itself with a team of British criminals who are planning a Big Job. As the title suggests, things do not go in a straightforward way – there is no honour among thieves, remember?

Things are further complicated by the arrival on the scene of Katana, one of Razorjack’s aforementioned Twist Bitches, here on Earth with an agenda of her own.

Katana enters into a pact with a deliciously amoral gangster and agrees to help him track down the people who betrayed him during the Big Job in return for some help from him on her own mission in this dimension.

What follows is enormous, bloody fun. You can almost feel a palpable sense of relief as Carroll is allowed to take the brakes off and cut loose with lashings of violence, action and swearing. Not to say any of this is the expense of plot. Carroll knows how to spin an exciting faced paced tale with plenty of black humour and some great set pieces – a massacre during a heavy metal festival being a particular highlight.

This is not something I’d say often, but when I got to the end, I wished this book had been a bit longer. As with the Graphic Novel that inspired this book, this seems to be only scratching the surface of what is possible within the Razorjack universe, and I for one would like to see more.

Razorjack Double-Crossing is available on the Kindle store