Synopsis:
When a farmer removes a stone from a field, he awakens Rawhead Rex, an ancient Pagan God. Rawhead proceeds to unleash a murderous rampage across the Irish countryside, while possessing a priest to be his servant. A photographer from America must unravel the mystery of the monsters’ origin, and return Rawhead to his resting place.

The Books Of Blood by Clive Barker are among some of the most recognisable horror literature in existence. The six volumes of baroque writings have captured countless imaginations since their release in 1984. They’re an exploration of the flesh, and wonderfully crafted stories of what Barker often refers to as the ‘Fantastique.’ No other writer in history has been able to accomplish so much within the genre; from books, illustrations, to film—it seems he’s done it all, and taken us along for the journey.

Considering the potency found within the text, adapting one of these stories to celluloid seems like a logical course of action. It’s been done more than once, but with very mixed results. Both The Midnight Meat Train and Candyman were successful, and well received by both critics and audiences. They also managed to capture the essence of the original source material, all the while having a life of their own.

However, the same can’t be said about George Pavlou’s 1986 catastrophic disaster known as Rawhead Rex. Based on the story of the same name, and with a screenplay written by Barker himself, it’s one of the worst literary adaptations of all time. It took a visceral story, and transformed it into something bland, awkward, and completely forgettable. Even if one were unfamiliar with the origins, it still lacks the ability to stand on its own as anything of genuine merit.

Rawhead Rex is the story of a Pagan god, raised from the dead, who unleashes a wave of terror on the unsuspecting English countryside (although the film takes place in Ireland). The original source material is one of the best in the anthology, and touches upon themes of religion, xenophobia, and the phallic principal in horror. In retrospect, this had the potential to be nonstop thrill ride. However, nothing went right, and everything went wrong.

The biggest farce here is undoubtedly the monster. Rawhead is probably the most unimpressive and unconvincing creature to ever appear on screen. Bearing a close resemblance to a bloodthirsty guerrilla, he’s utterly laughable, and even cartoonish in his appearance. Barker would even go on record to describe him as “Miss Piggy in combat fatigues.” Low-level production design aside, his actions are more akin to those of a b-grade slasher villain. We’re treated to POV camera angles at times, and introduced to victims who are bumbling, annoying, and blissfully unaware of the danger that they place themselves into.

This brings up the other problem that’s painfully present—the lack of fluid direction. Much like the victims who meet an untimely end, this film seems to have no idea what it is, or what it’s trying to be. It’s a bizarre melting pot of different elements, which come across as a jumbled and confusing mess. The story stumbles about, constantly falling over itself in utter confusion. It’s part slasher, part monster movie, and possesses many of the boring clichés one finds in a disaster flick. (I.E.—The bumbling police and the ordinary person who sees the real problem early on with no one believing them.) 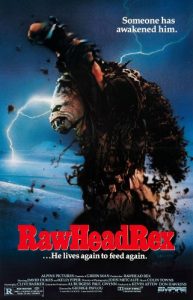 The characters you’ll come across during the film exemplify the definition of one-dimensional. They’re uninteresting, mundane, and just like everything else in the film, horribly written. The dialogue is completely unbelievable, poorly presented, and absolutely atrocious. Needless to say, its delivery doesn’t help either. Every line that’s uttered is hokey, to the point that it lacks any credibility whatsoever.

There’s an old expression; “Every cloud has a silver lining.” Needless to say, in this unorganised mess, there’s one good thing that would emerge. Clive Barker would take charge and direct the next literary adaptation the following year. The result was Hellraiser, and the rest is history.