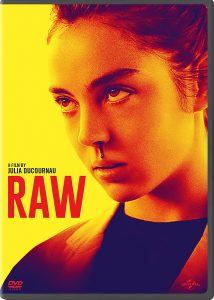 The concept of transformation – whether physical or figurative – is at the core of so many horror tales, but few modern films have depicted it in quite as painful and upsetting a manner as Julia Ducournau’s devastating feature debut, Raw. Tearing its way through last summer’s festival circuit like a wild dog, the film that propelled the Parisian director into the genre limelight is now poised to hit DVD, and if you’ve not seen it yet, it’s an absolute must.

Raised in a strict vegetarian family, young Justine is forced to eat a rabbit’s kidney as part of a hazing ritual after beginning her first term at veterinary school. The experience awakens a hunger for meat in the naive but promising student that escalates frighteningly quickly and leaves her confused, scared and ravenous.

Seeing Justine spiral into increasingly depraved territory is deeply upsetting because from the first frame in which she appears, we really, really like her. In her first feature role, Garance Marillier is an absolute revelation, imbuing her character with a sheltered innocence with wide eyes that are constantly absorbing the new sights and experiences that college life throws at her. As the film progresses, we see a slavering hunger in those eyes, but they seldom lose that frightened, rabbit-in-the-headlights stare.

The vet school hazing sees Justine and her fellow “rookies” lined up and treated like the animal carcasses that are routinely brought in for their classes. These scenes are cold and dehumanising, but as Justine’s hunger later deepens, she too will begin to see others as little more than meat. While her descent into animalistic craving is tough to watch however, her struggles to fit in socially in a new and scary environment are upsetting enough in themselves, especially when her older, more confident sister Alexia (who also studies at the school) plays a part in her mistreatment. 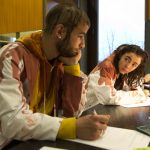 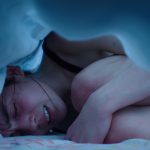 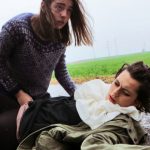 Raw is the work of a burgeoning but utterly assured filmmaker with an acute grasp of the genre. Ducournau’s script is original and fiercely perceptive, and realised in an emotive and rich manner that highlights themes of blossoming sexuality, parental influence and turbulent but unbreakable sisterly bonds. It also explores the physical and behavioural expectations of young women and – foregrounded by Justine’s self-assured gay roommate Adrien and Alexia’s tough approach to preparing her sister for womanhood – the struggle to be allowed to be yourself, whilst challenging its viewers with moments of visceral, squirm-inducing and again, rather unique, bursts of horror.