Mixing creature feature craziness with unorthodox political satire, Ratpocalypse, with its ‘50s B-movie poster art and nutbags concept, is going to prove hard to resist for some. Ahead of the film’s December home release, we’ve now got a trailer, and it’s as weird as one would hope. 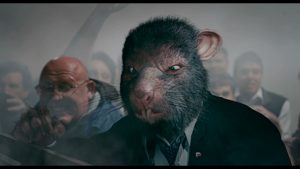 A US/Russia co-production, the film is the work of first time writer-director Vladimir Uglichin, and stars genre veteran Casper Van Dien (Starship Troopers, Sleepy Hollow) alongside Victoria Summer (Dracula: Reborn), Linda Bella (Devil’s Domain) and Catherine Oxenberg (The Lair of the White Worm). Uglichin also produced the film, together with Peter Zhmutski and Gray Frederickson, known for his work on the likes of The Godfather and Apocalypse Now! 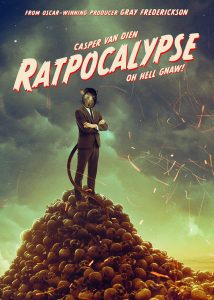 Synopsis:
American Senator John Perryman (Van Dien), a man of pure and humble soul with a warrior’s disposition, delivers a fiery speech in Moscow about the country’s main evil – corruption. A corruption so pervasive it will turn men into “rats.” He declares that he was ordered to speak to them from above and threatens everyone with the loss of their human form, which draws only guffaws and resentment from the people. Many take the Senator for a madman as gradually, all his friends and relatives turn away from him. Eventually the Senator meets a mysterious girl in the streets who seems to be his guardian angel, but soon everything he talked about in Moscow begins to come true, triggering panic in Russia and around the world.

Ratpocalypse premiered in Moscow back in 2015. It will be available On Demand from December 12th.