RASPUTIN – THE VOICE OF THE DRAGON #1: Comic Review

It’s no secret that Mike Mignola is the hardest working man in the comic industry. Whether writing, drawing, or outlining comics (sometimes all three), expanding on the Hellboy and Mignola-verse universes, helping bring the new Hellboy movie to life, going off to comic conventions, or just genuinely being a chill guy, he’s a man more addicted to comics than a kid high on soda and puberty. With the recent re-release of Mignola’s and artist Troy Nixey’s 2011 comic Jenny Finn, it looks like fans will be treated with more occult madness from his newest work, Rasputin: The Voice of the Dragon. Despite like sounding like a kick-ass nineties martial arts film where Rasputin gets revenge on a gang of ninjas who murdered his parents by finding the power of the Dragon within, it’s actually a tad more serious where the once-thought-dead Rasputin shares his powers with the Nazi’s to raise an army of the undead. If this sounds familiar it’s because this work expands on the background story of Rasputin and the Nazis that was originally part of Hellboy’s origin story. Of course, we all know that they were successful in bringing about a demon from Hell, but how did a loyal Russian end up teaming up with his worst enemies in the first place? Step behind the curtain and prepare to be surprised.

The comic, much like many Mignola comics, starts with a fantastically dank and forgotten corner of Eastern Europe during WW2. As an SS soldier makes his way through a bombed out a church, he runs across a hooded man praying to a dragon deity. That hooded man is no other than Rasputin himself and that soldier has an offer he can’t refuse. Quickly, the comic cuts back to everyone’s favourite occult professor/father figure, Dr. Trevor Bruttenholm, still years away from adopting Hellboy and currently working as a de-coder for the English. Loving the puzzling nature of decrypting intercepted messages, it’s not until he receives a series of messages about a ‘ghost’ that he realises that there’s been a pattern of messages all dealing with the occult. Quickly, he begins to put the clues together and learns that all the messages talk about the same small town in the English countryside, but when he gets there, things just become weirder. Suddenly, stories of ghostly men and haunted cemeteries begin to rear their heads and before he knows it, he’s suddenly much involved than he ever planned, especially when the bodies start turning up.

Rasputin: VOTD is a work that is definitely aimed at the Hellboy crowd. There’s plenty of small references to previous Hellboy works and it answers a lot of questions that fans didn’t know they had. How DID Rasputin survive getting shot, drowned, and poisoned? Why IS he hanging out with the Germans? That being said, it’s not un-accessible to fans new to the universe. Yeah, it definitely helps if the reader has some sort of knowledge of Hellboy, or at least his origins, but it’s surprisingly not necessary. The story is set up like mystery, where the reader doesn’t know any more than the Professor (who does get an introduction), and he allows the reader to follow with him as he looks for the answers to the intercepted notes. Of course, it helps that Rasputin, the Nazis, and the War were real events and people, so it spares the reader from having to know the basic facts of the story, allowing for an easy transition into the fictional cults and characters in the comic. Even the professor is a pretty simple character, a happy little guy with a sharp mind and a love of mysteries, long before he got weighed down with the weight of the world. In other words, fans are allowed to treat this as a standalone series and still be entertained. 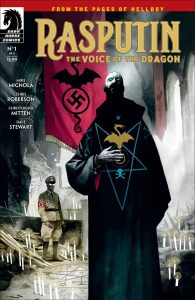 Similar to his BPRD work, Mignola shares writing duty with a secondary author, this one being Chris Roberson of iZombie fame. The two work well together to set up an easily digestible comic, even with a propensity for explanation via talking head syndrome. A couple times, the comic will slow down while the professor has conversation with another character, but the two authors manage to make it interesting by dropping in illustrations of the conversation, such as the men dressed in masks while speaking of the Heliopic Brotherhood of Ra. It’s kind of like watching a really interesting slideshow. Speaking of illustration, art duties are handled by the very talented Christopher Mitten, who has a worked with both Mignola and Roberson before on Rise of the Black Flame. His artworks isn’t too different to Mignola’s own style and it easily translates the scripts on to the page, but retains enough originality to be claimed as his own.

Pick up Rasputin: Voice of the Dragon today!