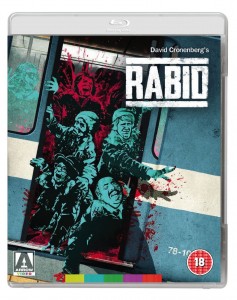 Synopsis:
Lovers Rose and Hart are involved in a horrific road accident. Their motorbike crashes and both are taken to a nearby cosmetic surgery hospital for treatment; given there is nowhere more conventional in close distance and time is of the essence. Hart is fairly unscathed, but his girlfriend doesn’t get off so lightly. Resident surgeon, Doctor Keloid, has to perform an emergency surgery  to save her life, and under anaesthetic she is also given a new form of experimental skin graft that comes with devastating results. Left in a coma, no one knows if Rose will ever regain consciousness. When she finally awakens she is a changed person- barely more than a creature, and one that needs human blood to stay alive. Her victims live, after being drained of their blood, only to contract the same illness that haunts Rose. As Rose escapes the confines of the medical facility she takes with her an infection that threatens to destroy the whole city. That is unless she can be stopped.

You can say what you like about filmmaker David Cronenberg but one thing you cannot deny, he is the King of body horror. While the director has made many films, in all sorts of weird and wonderful flavours, for horror fans he will always be remembered for his earlier works- works that often covered hideous, shocking and grotesque bodily associated themes. Establishing a career in the late 60’s early 70’s and beyond, Cronenberg turned out some impressive low-budget features that crossed sci-fi with horror elements to achieve some thoroughly potent pieces for the genre; thus setting out his name and cinematic voice as someone who was innovative, original and edgy. You have to hand it to the man, no one has delved into the ideas surrounding the body and the self as a forum for horror to develop, on the same level Cronenberg has. If you look at the period within which the filmmaker was making these films it becomes even more apparent just how ahead of his time he really was. The director standing out like a lone wolf in contrast to say the slasher dominated themes of the era, the rise in popularity of Satanic panic inspired numbers, and dying days of classically styled genre pieces. What Cronenberg did was produce work that was typically his, and no one else’s, a slick brand of horror that dealt in Freudian undertones, a social satire subtext, controversial themes and shocking imagery.

Cue RABID (1977), Cronenberg’s ‘vampire’ effort, which, in the spirit of the director is about as far cry away from your creaky cobweb vampire flicks of old as you can get. If you compare this to its peers in the vampire subsection of horror, this has no relation to the reigning Hammer type vamps of the age, just as it has nothing to do with the floaty sexed up seventies styled vamps of Europe either. What the director does give us is something linked to a stark urban background where redemption is elusive- a modern day landscape of brick and concrete where people become just as impersonal as their surrounding environment. He brings us something nihilistic with no messages of good wins over evil, no final battle, and no big winning showdown. RABID instead denies viewers that closure and teaches us life is as grim as it is fragile. The vampirism here becomes like a plague, passed on mindlessly and instinctively from one recipient to another through physical contact; although not overtly sexual this does appear to have some reference to sexually transmitted disease. Taking it back to the literal vampire line, here, those infected don’t gain the power, elegance or romance of an A-typical vamp; instead they become just one more in a growing army of zombielike creatures thirsting for blood, dripping green goo from their mouths and blood from their eyes.

Adult film sensation Marilyn Chambers was cast here as the lead Rose, in her only straight role outside of the aforementioned industry. Rising to the challenge, Chambers proves her worth as a capable focus for the horror to unfold. Her performance has a detached edge that fits well with her character, adding in an air of mystery when it comes to figuring out just what is going on in Rose’s head and where she might lead the audience. It is with some irony that throughout Chambers’ performance as a predator- given the actress’ main career in pornographic films- she is seen ‘penetrating’ her victims by means of a gross, and somewhat phallic, tentacle. This appendage comes hidden in an orifice in her armpit, the design of which probably shouldn’t be described in polite company! The wider cast do a fair enough job in their roles and overall the picture does have that charming low-budget feel to the acting standard. While the practical effects work is something of a marvel, given the associated budget; although it’s important to note this film isn’t quite as graphic as some of Cronenberg’s other efforts, that’s not to say it’s shy on showing the nitty gritty when it needs to either.

Arrow present another beautifully restored edition, in a limited Blu-ray/DVD combo with Steelbook packaging, the specs of which are as follows:

All in all this set is a must have for all fans of the director- given the fantastic, flaw free upgraded print and valuable extras. It will also appeal to those who love their horror with a slice of gross-out themes and a thought-provoking subtext. Not for the squeamish.