Quietly Disturbing New Trailer And Poster For Some Kind Of Hate 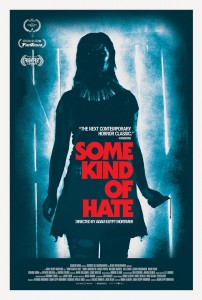 If you like supernatural revenge horrors then Some Kind Of Hate should be right up your alley. The poster proves that simplicity is sometimes a great way to go; with just two colours it successfully manages to create a bold and haunting design, with a vintage edge. The trailer, too, is quite simple. It’s dialogue-free, but the visuals manage to speak a thousand words. It feels less like a trailer and more like a montage of various scenes, preferring to give us a taste of the violence and horror rather than telling us specifics about the plot. Trailers frequently spoil key moments of their films, but this does not. We’re given enough to get us intrigued, but there’s surely plenty more we can sink our teeth in to when we see the full film.

Synopsis:
Some Kind of Hate concerns “a troubled teen who is subjected to severe bullying, and accidentally conjures Moira Karp (McCormick). Once a teenage girl pushed to suicide, Moira is now an unstoppable force on a mission of gruesome retribution. But when she goes too far, he must prevent her from spiraling out of control.”