The sequel to 2015’s micro-budget indie horror anthology Volumes of Blood is on its way from Blood Moon Pictures, heralded by this all-too-brief teaser. 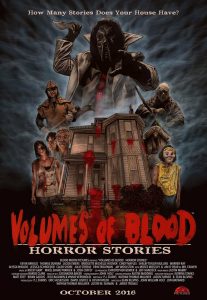 Opening with a montage of bloody mayhem from the first film, we get a series of violent snippets from follow-up Volumes of Blood: Horror Stories and it looks to be delivering more of the same. This was in fact, they key pitch behind producer/director PJ Starks’ crowdsourcing campaign for the film, which reunites the team behind its predecessor.

This time around, Starks has gathered up-and-coming directors including Brad Wiebe (A Brush with Death), Nathan Thomas Milliner (short The Confession of Fred Krueger), John William Holt (The Dooms Chapel Horror) and Justin M. Seaman, the man behind ‘80s throwback The Barn.

Volumes of Blood: Horror Stories will premiere at Owensboro Convention Center in Kentucky on Saturday, October 29th. Further release details are yet to emerge.