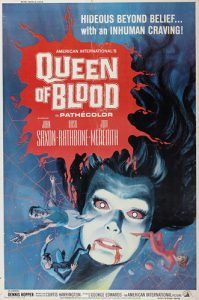 Synopsis:
A team of astronauts embark on a mission to rescue a crashed alien vessel from Mars but are led into a false sense of security by its seemingly affable occupant.

Twenty years before Tobe Hooper’s botched blood suckers from beyond the stars movie Lifeforce arrived, Writer/ Director Curtis Harrington (Who Slew Auntie Roo?, Killer Bees, Devil Dog) crafted a similar sub-genre hybrid. But where Lifeforce was generally an earth/ London set endurance test, Harrington’s Roger Corman produced sci-fi/ horror wallows in deep space for its cumbrous majority before unveiling a novelty sting in its spine-tingling finale. Queen of Blood jumbles similar styles to Hooper’s vampiric space stinker but in a much more cowed and chic/ kitsch manner and with sneaky, unsettling scares. The problem is, for its majority, Harrington’s film is just another elongated, under-financed space opera and remains mostly flimsy until the creature arrives to stoke fear throughout the final third.

“The year: 1990. The problem of travelling to the moon has been solved for many years. Space stations have been built there,” relays the opening voice-over in classic 50s news reporter style with the dramatic range and magnetism of an automated PPI call. Even though Queen of Blood landed in 1966 it resounds like a lost and lesser sci-fi from the early 1950s. More specifically, the paranoid, atomic-mutation age of The Blob, Phantom From Space and Them. Considering 2001: A Space Odyssey and Planet of the Apes arrived only two years later in 1968, Queen of Blood feels like a product from a bygone age and more like a stone’s throw from Ed Wood’s oeuvre than the progressive aforementioned. This is mostly due to the craptastic, but sometimes charming, effects and plethora of production faults in the form of fuzzy visuals (most of which were lifted from Russian features Mechte navstrechu (1963) and Battle Beyond the Sun (1959)), ersatz performances, cut-out characters and perfunctory directing, but the miniature rockets and space station models bring a welcome charm. 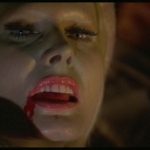 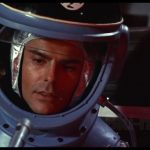 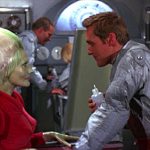 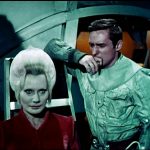 After receiving a message from deep space, informing earth that aliens intend to send an ambassador to vet our planet for potential habitation, the International Institute of Space Technology prepares for their imminent arrival. Soon after, the astral communications department receive a follow-up distress signal claiming the vessel has crash-landed on Mars. Cosmonaut Allan Brenner (John Saxon) then journeys with an observational satellite in attempt to rescue the alien spacecraft. His colleagues include a wet behind the ears astronaut Paul Grant (Dennis Hopper), Basil Rathbone as the officious and blithering Dr Farraday and Judi Mereditch as technician Laura James. The Queen of Blood of the title (brilliantly played by Czech actress Florence Marly) is a ruminating, green-skinned, femme-fatale, with a curious, continuous and strangely seductive smirk, a secret, voracious blood-lust and Medusa demeanour. She never explodes into monstrous rage or snarls like Nosferatu but gazelles in the manner of a rhythmic swirl, like a snake in a dress or personified lava-lamp, leisurely tempting men into blood laden mishap. 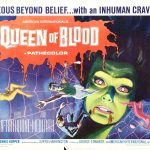 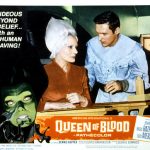 Despite its similarities, what separates Queen of Blood from straighter, more refined sci-fi films from the 1950s is the plaiting of sharp horror scenes into its finale which resonate due to elegant weaving/ execution and their appearance out of context/ within an alien space realm. The crew encounter all kind of astrological hullaballoo as the bumbling action seeps into suspense yet Queen of Blood is merely a slip-shod curio which has a few memorable moments but is predominantly inept. Some amazing art decorates the backdrop of the opening credit sequence, along with an eerie score by genre specialist Ronald Stein (Attack of the 50 ft Woman, Dementia 13, She Gods of Shark Reef) but apparently Louis and Bebe Baron’s “tonalities” are hijacked from Forbidden Planet. Aside from its last act horror twists, a flurry of tension, implied kill scenes and a surprising amount of claret, for most of the duration, Queen of Blood is a bog standard b-flick with hammy dialogue (“That’s the one bad thing about space trips: no banana splits”) and an inability to escape it’s outdated genre trappings and innovatively rise above some glaring financial limitations.