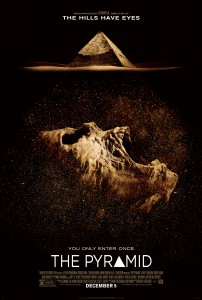 Synopsis:
American archaeologists realize that something is hunting them as they try to find their way out of the catacombs of a newly discovered pyramid beneath the Egyptian desert.

Bizarrely the idea of watching a member of the public standing in a huge plastic box whilst attempting to bounce a ping pong ball into an egg cup is now considered prime time viewing on ITV if ‘The Cube’ is anything to go by. I’ve submitted several ideas how to improve it but my suggestion as to guess how long it takes a layer of paint to dry has been met with a stony silence. Likewise my idea for Celebrity Big Brother where a rabid Bengal tiger is introduced into the house has yet to be take up despite the obvious plus points out that it would not only keep the animal safely contained but also would carry out a much needed cull of D-list celebrity detritus trying to revive their flagging careers.  Regretfully it’s an idea that’s only been partly taken up with this week’s new release, ‘The Pyramid’. Set in an Egypt destabilised by civil unrest  a small team of archaeologists discover a three sided pyramid. Ignoring orders to leave the country due to the instabiility of the populace they send a robot not dissimilar to Johnny 5 from Eighties family favourite ‘Short Circuit’ into the Pyramid to look around only for it to inevitably break down. It’s no surprise that the archaeologists and the 2 man film crew abandon cast common sense to one side as they all decide to go in and retrieve it only to inevitably get lost and realise that they’re not the only ones in there.  It’s no spoiler to say it isn’t a rabid Bengal tiger.

Once again this is yet another found footage film where the director frequently forgets the limitations of that format frequently using shots that aren’t provided by any of the characters. It’s not the only problem as the film is beset with ropey dialogue, the almost obligatory and nonsensical notion that the team split up and little chemistry between the cast which includes James Buckley as the cameraman not always successfully keeping his ‘Inbetweeners’ character Jay in check and a father/daughter archaeologist pairing where Ashley Hinshaw has chosen to portray the educated and knowledgeable pyramid poker as a truculent teenager.

But that said it’s not all bad and director Gregory Levasseur effectively captures the claustrophobia once inside the Pyramid. Having produced films for Alexandre Aja who returns the favour here Levasseur makes his directorial debut with what is at best an enjoyably silly Saturday Night movie leaving you to guess in what order the cast get picked off.

Now there’s an idea – how about putting the entire cast of TOWIE in a freshly opened Pyramid?