Pure Horror is Where the Heart is in Sitges 2015 Lineup 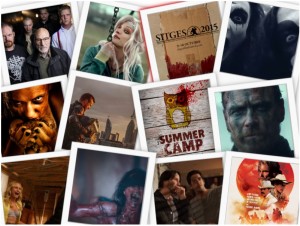 Running from the 9th through to the 18th of October, the complete Sitges 2015 lineup has now been officially revealed. This year’s festival promises a solid selection of stunning genre films from around the world, together with the most transgressive and radical genre projects, new emerging talent, the latest in Asian cinema and a painstakingly chosen selection of documentaries. Horror in its purest form will certainly steal the show at the 48th Sitges – International Fantastic Film Festival of Catalonia with particular emphasis on North American horror and the best genre films emerging countries have to offer.

The Official Fantàstic In Competition selection will include gripping projects such as the highly anticipated Turkish film Baskin, directed by Can Evrenol, a gore fest which pits a group of cops against a genuinely terrifying occurrence; the North American film The Devil’s Candy, directed by Sean Byrne, a horrifying tale of satanic possession from the director of the sleeper hit The Loved Ones; Bone Tomahawk, by S. Craig Zahler, a western starring Kurt Russell and Matthew Fox, that mutates into quite the exquisite horror movie, or Macbeth, by Justin Kurzel, a visceral adaptation of one of Shakespeare’s bloodiest tragedies, starring Michael Fassbender and Marion Cotillard.

The Festival lineup also includes productions such as Marcin Wrona’s Demon, relating the tale of a couple who come upon human bones on the grounds of their future home, just the first episode in a whole series of bizarre events that will culminate in the intrusion of a turbulent spirit; Todd Strauss-Schulson’s slasher throwback The Final Girls, with rising starlet Taissa Farmiga (who attended Sitges 2013 with Mindscape [AKA Anna]) and Malin Akerman, a film where the daughter of a horror film star goes to the screening of a slasher movie starring her mother, but an accident drags the girl and her friends into the film; Kiyoshi Kurosawas’ Journey to the Shore, a story where a woman who lost her husband at sea sees her partner’s ghost appear before her very eyes; or the Danish What We Become, by Bo Mikkelsen, where a family winds up isolated as a result of a lethal flu outbreak and find themselves having to take all measures necessary to protect themselves.

This selection will also include titles like The Boy, by Craig Macneill, an intimate look at a youngster with psychotic tendencies starring David Morse and Rainn Wilson; Cemetery of Splendour, by Thai director Apichatpong Weerasethakul, an evocative film where a group of soldiers are treated for a strange disease that causes constant sleepiness; André Turpin’s Endorphine, where the lives of three women named Simone begin to mysteriously and almost dreamily communicate with each other, or the latest project from Alex van Warmerdam who, after taking home the Award for Best Feature at Sitges 2013 for Borgman, presents the film Schneider vs. Bax this year, packed to the rafters with pitch black humour.

The Festival proceedings will be brought to an end with the Canadian film Into the Forest, by Patricia Rozema, a survival drama in which the magnificent Ellen Page and Evan Rachel Wood play two sisters trying to survive in a future world where a huge blackout sends humanity hurtling towards the end of days.

Aside for the above additions lest we not forget the previously revealed top tier films like Love, by Gaspar Noé; Victoria, by Sebastian Schipper; Green Room, by Jeremy Saulnier; The Gift, by Joel Edgerton; Turbo Kid, by François Simard, Anouk Whissell and Yoann-Karl Whissell; Yakuza Apocalypse: The Great War of the Underworld, by Takashi Miike; Life, by Anton Corbijn; Le tout noveau testament, by Jaco Van Dormael, or Last Days in the Desert, by Rodrigo García, to name but a few.

The Festival will also be screening films from a variety of other genres which often live in harmony with the fantasy genre. The Official Òrbita section becomes the paradigmatic space for these productions, presenting thrillers like Cédric Anger’s La prochaine fois je viserai le coeur, a film in which a brilliant and disturbing Guillaume Canet plays a shy cop in charge of investigating crimes he committed himself; Veteran, by Ryoo Seung-wan, -award winner at Sitges 2011 with The Unjust–, a new and exciting thriller from the Korean master where a detective out for justice declares war on a very powerful tycoon; or the British comedy The Legend of Barney Thompson, Robert Carlyle’s first venture as a director, who in it also plays a shy, mediocre barber in Glasgow who is about to suffer a drastic change in his life. The Official Sessions Especials (Special Screenings) Section will also be offering fims such as the latest outing from the Monty Python crew, Absolutely Anything, directed by Terry Jones (Life of Brian), and starring the charismatic Simon Pegg, or the new film by Paolo Sorrentino who, after delighting us with La Grande Bellezza, now presents Youth, a nostalgic portrayal of maturity, with Michael Caine and Harvey Keitel.

Once again this year, the most transgressive cinema from around the world will be coming together in Noves Visions, a section that will this year be restructured into two large subsections: One and Plus. One will be screening the latest from the most renowned profiles on the international scene: Anomalisa, by Charlie Kaufman, the brains behind the great films of Spike Jonze or Michel Gondry; Cosmos, the latest from the legendary Andrzej Zulawski, a recent award winner at the Locarno Festival, as well as the latest works from first-rate filmmakers such as Michael Winterbottom with The Face of an Angel or Takeshi Kitano with the black comedy Ryuzo and the Seven Henchmen. Noves Visions One will be kicking off with the Spanish film La Novia, by Paula Ortiz, an imaginary take on the classic Bodas de Sangre, by Federico García Lorca, and closing with Evolution, by Lucile Hadzihalilovic, one of this season’s most disturbing films.

Noves Visions Plus, on the other hand, will be the ideal place to discover new, up-and-coming talents, hybrid formats and the most experimental cinema. Plus will be including the radicalism of Rick Alverson and his Entertainment, the piece that will be kicking off a selection that includes peculiar works such as Moonwalkers, by Antoine Bourdon-Jacquet; innovative formats like the ones used by Sean Baker in Tangerine, or one of the most terrifying experiences at this year’s Festival, Der Nachtmahr, a German production directed by multidisciplinary artist Akiz, one that will be sure to give audiences genuine nightmares. Noves Visions Plus will be closing, out of competition, with a review of historical Korean cinema, the surprising The Royal Taylor, by Lee Woon-Suk.

The main, independent, fantastic and horror genre productions will be screened under the umbrella of the Fantàstic Panorama Section, which will include titles such as El Eslabón Podrido (The Rotten Link), by Valentín Javier Diment; Hellions, by Bruce McDonald; Nina Forever, by Chris and Ben Blaine; Scherzo Diabolico, by Adrián García Bogliano; Southbound, by various directors; Tales of Halloween, directed by eleven renowned genre directors; The Dead Room, by Jason Stutter, or The Mind’s Eye, by Joe Begos. In addition, the Panorama Documenta Section will be introducing non-fiction pieces revolving around genre, as well as its creators. Such is the case with Dark Star – HR Giger’s World, by Belinda Sallin, a documentary that shows the more intimate facet of the father of one of the most fearsome of creatures in cinema: Alien, or I am Your Father, by Toni Bestard and Marcos Cabotà, a tribute to the actor who played Darth Vader in the first part of Star Wars.

Anima’t has designed a selective and attractive lineup of animation projects from all over the world, with works such as Dragon Ball Z: Resurrection ‘F’, by Tadayoshi Yamamuro, its screenplay written by Akira Toriyama himself, taking the saga back to its purest roots, and Evolution Man (Pourquoi j’ai pas mangé mon père), by Jamel Debbouze, a comical adventure between the human and the animal element, filmed using motion tracking techniques.

Alternatively, the Midnight X-treme Section will be screening the most gallant of independent horror movies, including the must see body horror of the year Bite, by Chad Archibald, where a girl experiences a disturbing transformation after a hen party holiday little bug bite. Horror and hemoglobin will be keeping up the tension levels in Midnight X-treme with other films such as Bloodsucking Bastards, by Brian James O’Connell; Deathgasm, by Jason Lei Howden; German Angst, by Jörg Buttgereit, Michal Kosakowski and Andreas Marschall; Sendero, by Lucio A. Rojas, and Bite (that’s right, coincidentally there will be two different films going by the same name at Sitges 2015) by Alberto Sciamma, among others.

In addition, the Sitges Clàssics Section, this year celebrating its 20th anniversary, will be paying homage to the film Seven, star of the poster for the 48th Festival, a psycho-thriller that set a precedent and affirmed the talent of its director, David Fincher. This section will also be screening The Thief and the Cobbler, by Richard Williams, a film showing its director’s original work, inspired by A Thousand and One Nights.

Asian cinema will also play an important role at Sitges 2015. Renowned and other up-and-coming filmmakers have films screening in most of the sections, among which are the outstanding Two Thumbs Up, The Assassin, Helios, Port of Call, or the previously announced The Taking of Tiger Mountain and SPL2: A Time for Consequences. Once again, the Sitges – International Fantastic Film Festival of Catalonia will be collaborating with the Hong Kong Economic and Trade Affairs Office.

The Festival Adds a Room

The 48th Sitges – International Fantastic Film Festival of Catalonia will be launching a fourth room to add to its four classic screening areas: the Auditori, the Retiro Theater, the Prado Theater and Brigadoon. The Tramuntana Room, also located in the Hotel Meliá Sitges, the official Festival headquarters, will be fit out as a theater and will play host to a good number of screenings, as well as certain relevant master classes. The new room will add flexibility to the Festival in terms of structuring its schedule and will open up so many new opportunities for Festivalgoers and fans alike. In addition to these five theatres, the Festival will also have other venues offering free screenings.

The lineup schedules for all venues will be published this coming Monday 14 September and tickets will go on sale Friday 18 September at 12 noon.

In the meantime we’ll leave you with the official teaser trailer for the festival: