The Indiegogo campaign for Puppet Master: Axis Termination has been rolling along rather nicely for a while, and has now been announced as a resounding success. This latest chapter is the eleventh (and apparently final) instalment in the series, which started back in 1989, and also spawned 2004’s Puppet Master Vs. Demonic Toys crossover. The series has proved an ongoing hit for Full Moon Features, the production company of legendary low budget horror maestro Charles Band.

Full Moon have now released a synopsis for Axis Termination, included in the press release which begins: 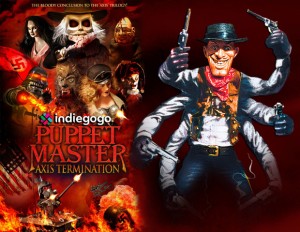 DUDES! – Our ‘Puppet Master: Axis Termination’ crowd funding campaign on INDIEGOGO was a HUGE success! And it is all thanks to you – our loyal Full Moon fans! 400 plus backers have helped us raise $77,750 as of today and the contributions keep coming in. YOU have made it possible for this new Puppet Master sequel to be even better! The film will now have MORE practical effects! MORE stop-motion-animation! MORE amazing sets! MORE awesome puppetry! And YOU have made it possible to bring back fan favorites TORCH, LEECH WOMAN and SIX-SHOOTER! All of us from Full Moon Features would like to say THANK YOU!

Fans can still contribute to the campaign, which is offering a number of perks including signed scripts and T-shirts, replicas, the chance to name a character in the film and tickets to the cast and crew premiere. The press release’s official synopsis is as follows:

In PUPPETMASTER XI – AXIS TERMINATION, the final chapter of the Puppet Master Saga, we find our heroic band of lethal puppets—BLADE, PINHEAD, TUNNELER, and LEECH WOMAN, joining forces with a secret team of Allied Operatives, all Masters of Psychic powers, as they face off together against a new bunch of evil Nazi adversaries and their collection of vicious Axis Puppets in a showdown that will decide the future of the free world!

The prolific and legendary cult movie auteur CHARLES BAND will be directing and is more than ready to shoot the long awaited PUPPET MASTER: AXIS TERMINATION. So get ready to once again fight evil Nazis, Evil Puppets and help win World War II alongside ALL of your favorite puppets! BLADE, PINHEAD, TUNNELER, SIX-SHOOTER and LEECH WOMAN are ready to defend the U.S. against all-of-the axis of evil! Our most beloved Full Moon franchise is back! Puppet Master: Axis Termination is headed into production early 2016 with the help of ALL of your contributions!

We couldn’t have done it without all of you! Full Moon & Charles Band sincerely THANK YOU!

Puppet Master: Axis Termination is written, produced and directed by Charles Band himself, and goes into production soon.