This book tells the incredibly creepy story of ventriloquist Ronny McBane and his realistic dummy, Piggy. Their assistant, Gloria Seevers, is missing. The police prove to be little help in solving her disappearance. Months later her distraught sister, Kitty Seevers, receives a package which holds a lock of Gloria’s hair. The return address is for the club where Gloria was working as the act’s assistant, the Bamboo Club. Having lost faith in the police, Kitty decides to take matters into her own hands and heads to Chicago to try and find out who sent the package and what became of her sister.

She follows the trail and after an initial encounter with McBane and Piggy, tries to find out more. This leads to one of the most enjoyable passages of the book for me. She seeks out their old manager, Bascomb, and he recounts his experiences with the pair.  He tells the tale of another ventriloquist, Eddie Bose, who paid the price for his curiosity about how Piggy was able seem so alive. It is a joy to read, disturbing and gripping.

Piggy is an absolutely terrifying character, and Curran’s descriptions of him really bring him to life. Piggy has the presence, power and fear factor to put him up there with the horror icons we all know and love. Piggy is a horror icon in waiting. I suppose the closest horror equivalent would be Chucky from the “Child’s Play” movies, but Piggy is a far nastier and richer character. When it comes to creepiness factor, mannequins and dummies are right up there with clowns. Piggy’s uneven sharp teeth, articulation, and his black eyes add to the frightening ensemble that is Piggy. The symbiotic, well, parasitic relationship between Piggy and McBane is fascinating. 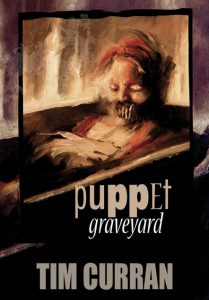 The atmosphere all through the book is dark and Piggy’s sinister presence is omnipotent. I can’t stress how deliciously creepy the setting, characters, and just the entirety of the book are. If a book is the sum of its parts and all the parts are this good, then you know you are reading something special. As the story progresses the origins of the McBane family and Piggy are unveiled and it does not disappoint.  The tension throughout the book is key to its success. But that’s not to say that it’s all tension and no gore, as there is a nice balance struck. There are definitely some graphic and disturbing scenes in there. As you read on, you’ll be pleading with Kitty to give up on her quest.  It’s reminiscent of watching old horror movies and shouting at the characters not to go in that haunted house. Kitty is a determined character and you’ll root for her.

All the books I’ve read by Tim Curran have never been less than excellent, and he’s rapidly becoming one of my favourite authors. I’m excited about reading the rest of his works. One request, Tim: more Piggy!