The 1980s was arguably the golden age of horror movie novelisations. From Videodrome to Fright Night to Friday the 13th Part VI: Jason Lives, if it was a movie, it was probably a novel as well. So it seems fitting that The Ranger, Jenn Wexler’s punk throwback slasher movie, should be getting its own official novelisation, along with a whole host of other 80s slasher-inspired merch. 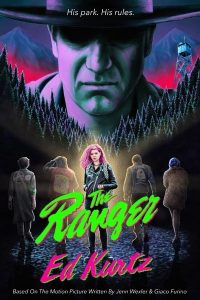 Released in 2018, The Ranger stars Chloë Levine and Jeremy Holm and follows a group of outlaw punks who decide to hide out in the wrong national park. The novelisation comes to us from Ed Kurtz, the author of The Rib from Which I Remake the World, and features cover art by Dyer Wilk. Based on the original screenplay, it will include scenes that didn’t make it into the film’s final cut.

In true retro fashion, other merch for The Ranger includes t-shirts, the soundtrack on vinyl and cassette, and a limited edition VHS tape. But if you threw your VCR away a decade ago, never fear—the film is also available on Blu-ray and DVD courtesy of Uncorked Entertainment and Black Fawn Distribution, and it’s coming to Shudder on May 9th.

The novelisation of The Ranger will be released by Twisted Publishing on May 3rd. Snag your copy here.