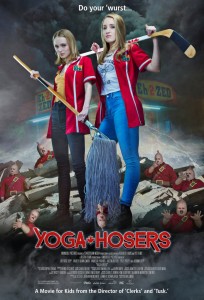 A new official poster has arrived for Kevin Smith’s hotly anticipated Yoga Hosers, showing Lily-Rose Depp and Harley Quinn Smith triumphing over the Nazi bratwurst, the Bratzis. Ahead of its July 29th US release, Smith is touring the film around the States, as is now customary for the director. The tour began on Wednesday in New Orleans and continues through seven locations, ending in San Francisco on July 17th.

15-year-old yoga-nuts Colleen Collette and Colleen McKenzie love their smart phones and hate their after school job at Manitoban convenience store Eh-2-Zed. But when an ancient evil rises from beneath Canada’s crust and threatens their big invitation to a Grade 12 party, the Colleens join forces with the legendary man-hunter from Montreal named Guy Lapointe to fight for their lives with all seven Chakras, one Warrior Pose at a time.

Back in April, Yoga Hosers was given a PG-13 rating following an unexplained turnaround from the MPAA, who initially gave it an R. The film’s UK premiere will take place at the Edinburgh International Film Festival on June 21st.