Psychotic Trailer for The Evil in Us

The Evil In Us screened at 2016’s Horror Channel Fright Fest and soon made its way to DVD in the UK in October of the same year. However, horror fans in the USA have been unable to get their hands on the film, because it is only hitting DVD on 4th July 2017, exclusively to Walmart stores.

Check out the new trailer for The Evil in Us below, which shows the film to be a pure onslaught of gory, bloody horror, but also a part cautionary tale about drug use. The slow descent into hell throughout the trailer is mighty satisfying; this is certainly one of the most bonkers and bold horror films from the last few years. 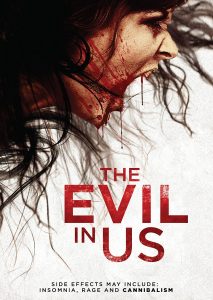 Synopsis:
While on a fourth of July holiday, six best friends fall victim to the insidious plan of a terrorist organisation when they unknowingly take a bio-active drug that transforms them into bloodthirsty cannibals.

The Evil in Us stars David Aboussafy, Melanie Joy Adams, Chris Allen, Darren Andrichuk and comes from writer-director Jason William Lee, whose name you may recognise from a few short films that include Demons in the Dark and Dark Whisperer.

You can check out our review of The Evil in Us right here and be sure to catch the film in Walmart next month.