I AM PROVIDENCE: Book Review

The Summer Tentacular, the premier H.P. Lovecraft fan conference held in Providence, Rhode Island is home annually to Lovecraft fans of all types and walks of life in this work of fiction. Geeks, goths, scholars, collectors, and writers converge in the name of fandom to honour the legend of the famous writer of weird.

Colleen Danzig is new to the Lovecraft circle and a new attendee to the con. She’s paired with roommate Panossian, a controversial and often disliked but well established Lovecraftian. Panossian ends up murdered, his face peeled off, and it’s his narration told from the cold slab of a morgue that introduces this novel.

Colleen initiates an investigation of the murder on her own as everyone else points the blame and questions at her. Her findings unravel dark & ancient truths of Providence, and of the man Lovecraft himself and of a morbid group of fans obsessed with collecting volumes bound in human skin. Colleen has found herself in a classic “whodunit” dripping with deceit and Lovecraftian lore. 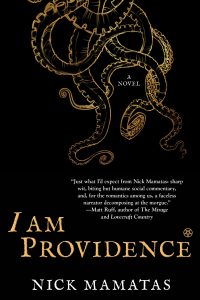 If you’ve ever attended a fandom convention and sat back with amusement watching the politics of the often colourful attendees, then this book will without a doubt please you. In these pages, Mamatas has re-created what it’s like to attend a fan convention with his delightful and expert wit and clever impressions of fandom thrown in for good measure.

Lovecraft fans will delight, but being a Lovecraftian is not essential. There’s plenty of HPL facts and passages scattered throughout to heighten anyone’s interest. Smart, witty and hilarious. Part parody on the genre, part dark mystery, it’s simply one of the best books of 2016. Mamatas writes with a sharp honesty of the genre and a demonstrated talent for storytelling.