Protect the Bloodline with a new Poster for Underworld: Blood Wars 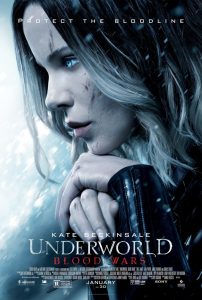 The final poster for Underworld: Blood Wars has been unveiled and it shows Selene (Kate Beckinsale) front and centre. Which is no surprise, because she is the main reason we’ve stuck with the franchise since the beginning, right? Through the ups and downs, the poor moments and the brilliant, we can’t help but return to see Selene kick more Lycan (and Vampire) ass.

In the next addition to the Underworld universe, Selene is back doing what she does best as she fights to put an end to the war between Vampires and Lycans. The film will continue after the events of Underworld: Awakening with Selene’s daughter Eve as important part of the on-going battle.