We’re huge fans of the Insidious franchise which, surprisingly, soared with its third instalment last year. James Wan and Leigh Whannell have conjured a solid, spooky modern horror franchise with the films and it’s showing no signs of slowing down.

Adam Robitel is at the helm of Chapter 4 and in a recent Tweet, he shared a picture of himself on-set and described how it was the film’s last day of principal photography. The release date was only announced back in May, with cast members still joining the film in September, so this is an extremely fast wrap for a film and we’re not complaining. The longer the film has to make insidious finishing touches, the better. 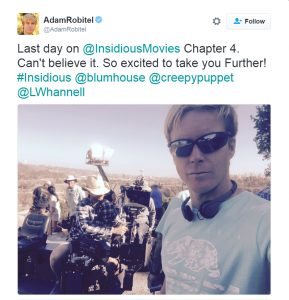