Production has begun on the Soska Sisters’ remake of David Cronenberg’s Rabid and it promises to be more than just a soulless re-imagining. When speaking about their work on the re-telling, the sisters said: 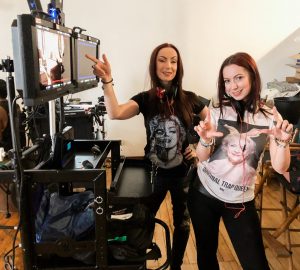 “It’s a tremendous honour to be re-imagining David’s 1977 body horror classic, Rabid, with such incredible support behind us. We are not fans of the current trend of soulless remakes as they disrespect the fans and the original body of work. Our Rabid is a continuation of the thoughts and conversation David started, but modernized through a female perspective. The film will not only honour his original Rabid but also Cronenberg’s entire body of work. This would not have been possible without a team behind us that cares about the artist as well as the fans.”

From the press release:
Drawing influence from the original movie, the remake is set in the seductive and glamourous world of high fashion and will follow Rose (Laura Vandervoort), a young woman whose disfigurement after an accident leads to a radical and untested stem-cell treatment. While turning Rose into the belle of the ball, the experimental transformation comes at a price.

Jen and Sylvia Soska have proved to be a strong force in the horror world with their 2012 feature American Mary and 2014’s sequel See No Evil 2. American Mary’s female-lead fixation is a sign of Rabid’s potential greatness and, if it can be as smart and witty with its horror, we’re sure this new Rabid can be a worthy re-telling of Cronenberg’s cult classic.

71 Entertainment will distribute Rabid in Canada with 101 Films handling the United Kingdom, Back 40 Pictures orchestrating theatrical distribution duties in the United States, and Shout! Studios’ Scream Factory imprint distributing the film across multiple platforms in the U.S.