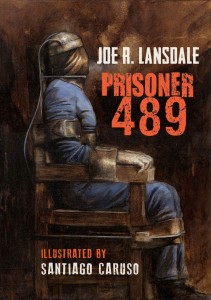 Two islands, one a prison containing the worst of the worst, those never to be released, each known only by number. A place where the electric chair practically sings with use. The second, a giant cemetery and a busy one at that.

I was definitely intrigued, three men inhabit this grave yard island, digging the graves, tending vegetable patches and a bit of general maintenance. Their slow sedentary lives are about to change however and the shit’s seriously about to hit the fan with the arrival of the corpse of Prisoner 489.

Okay I’m liking it up to that point, then the story takes a decided step in the wrong direction and rapidly cartwheels downhill. The author decides to give the game away early on with an explanation of the horror about to encompass the island, given away by one guy and his trusty encyclopaedia and even how to remedy the horror’s about to descend on them. Pretty cheap if you ask me, ruined the story and gave the game away early on with an almost casual reveal, no element of surprise and it was only ever going to end one way. Disappointing.

There is the occasional glimpse of the Lansdale humour but it couldn’t rescue a tale that didn’t even attempt to hide the path it was going to take.

Prisoner 489 by Joe Lansdale is the second in the Black Labyrinth series by Dark Regions Press, the first being The Walls of the Castle by Tom Piccirilli, four-time winner of the Bram Stoker Award. Unfortunately the standards reached by the first in the series did not continue in the second.