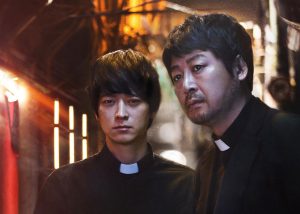 South Korean horror thriller The Priests (2015) offers nothing new to fright film fans who have seen The Exorcist and at least a couple of other possession movies, but it is unique in its home country because it pretty much introduces the idea of Roman Catholic exorcisms to a nation that has a tradition of native shaman exorcism rituals. That may be intriguing enough to attract some viewers outside of Korea who enjoy a little local color with their international horror movie offerings. The all-in performance by young actress Park DoSam as a possessed teenager is another reason to consider giving this film a shot.

The Priests opens with an ill-fated visit to Seoul by two Vatican priests who attempt to destroy a demon. This initial sequence, along with the opening credits, gives viewers a primer on the basics of demon possession by way of Catholic history (in cinema, anyway). After that, viewers are introduced to Father Kim (Kim YoonSeok), who is chastised by fellow clergyman for performing exorcisms on high school student YoungShin (Park SoDam), who was struck by a car. Also introduced is Deacon Choi (Kang DongWan), a troubled Seoul Catholic University student who eventually becomes the next in a long line of assistants to Father Kim.

Deacon Choi is skeptical already, and then is basically told to spy on Father Kim and report all of his activities back to the clergy, who suspects Kim of possible sexual abuse with YoungShin. The two men strike up an uneasy alliance but Choi is soon to find out that there may be truth to what Kim believes. 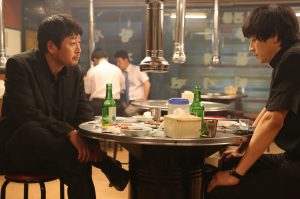 The Priests is loaded with tonal shifts, from conspiracy drama to horror to action, and so on. Writer/director Jang JaeHyun, who based this feature on his short film 12th Assistant Deacon, manages to weave the different elements together fairly well overall but the abrupt changes in style are evident. A smattering of corny moments might provide some international viewers with unintentional humor, and a few sappy moments feel decidedly out of place.

The leads give earnest performances, though the characters occasionally come off as cliched. Father Kim is a gruff, grizzled veteran of spiritual wars and is a man appreciated by no one. Kim YoonSeok inhabits him with an underlying sense of optimism and a studied energy. Deacon Choi is haunted by his past, making him — as experienced possession film viewers might guess — easy prey for the mind tricks of a demon. Kang DongWan gives an impressive turn here, helping to make Choi’s story arc believable, though the character’s acceptance of his role and fate happens quite suddenly.

Despite the solid work of these two actors, the standout performance for me was that of Park SoDam as the possessed girl. Park goes from shy, frightened, and sickly to chill-inducing without overdoing things. Though the writing of her possessed character brings nothing new to the exorcism bed, Park fully invests herself in her teeth-gnashing, blood-spitting performance. 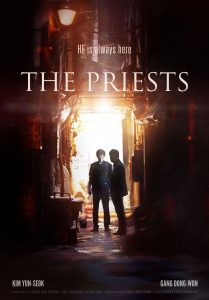 Being a mainstream South Korean horror film, there is little in the way of gore and intense fright here. Jang JaeHyun gives the exorcism scenes time to breathe and grow in intensity, but the results are rather tame compared with similar subgenre fare from the United States and Italy, for example. Most of the effects are of the CGI variety, sometimes showing their budgetary limitations.

A few questions arise regarding the plot. I don’t want to give away spoilers in this review, but I will give an example of such plot holes: Father Kim and Deacon Choi are supposed to be assisted by a doctor during the exorcism, but the doctor spends all of his time outside YoungShin’s bedroom, as do her parents. The doctor then claims that the girl’s vital signs are normal and that the exorcists are harming her. The parents are outraged and call the police. With the storytelling understanding that Father Kim has attempted exorcism on the girl several times before, why didn’t the doctor or parents ever see or at least hear any of the madness happening on the other side of the bedroom wall? 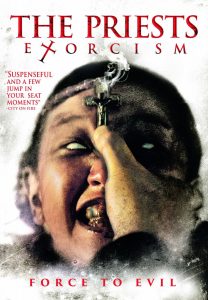 Despite frustrations like that one and some overly sentimental scenes that border on saccharine, there are enough positive aspects to The Priests to recommend it, especially to fans of Asian horror and possession film purists. Jang JaeHyun shows promise as a director and storyteller, and the cast acquits itself well. The film is shot nicely and provides some suspenseful moments.

The Priests is being retitled The Priests: Exorcism for its U.S. release. This may help bring more notice to it from international fright-fare fans, as the Korean title and movie posters give no indication that it is a horror offering, as it seems more like a religious drama.