Pride and Prejudice and Zombies Wishes us a Happy New Year 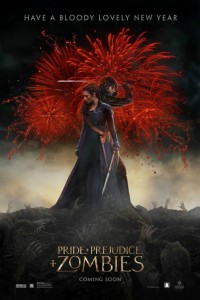 After wishing us a Happy Holidays in December, Pride and Prejudice and Zombies has now dedicated a poster to wishing us a Happy New Year. How sweet? The blood-splattery fireworks are a nice touch to the poster which originally read “bloody lovely”.

Pride and Prejudice and Zombies is a little over a month away from its theatrical release and it’s expectedly ensuring that it remains in the public eye. This is definitely high on our lists of horrors to catch in 2016, because a new take on the zombie genre is always welcomed.

Synopsis: A zombie outbreak has fallen upon the land in this reimagining of Jane Austen’s classic tale of the tangled relationships between lovers from different social classes in 19th century England. Feisty heroine Elizabeth Bennett is a master of martial arts and weaponry and the handsome Mr. Darcy is a fierce zombie killer, yet the epitome of upper class prejudice. As the zombie outbreak intensifies, they must swallow their pride and join forces on the blood-soaked battlefield in order to conquer the undead once and for all.

From director Burr Steers, Pride and Prejudice and Zombies stars Lily James, Sam Riley, Jack Huston, Matt Smith and Lena Headey. It will be unleashed in cinemas in the USA on 5th February and the UK on 11th February.