Pride and Prejudice and Zombies Poster Wishes us a Happy Holidays 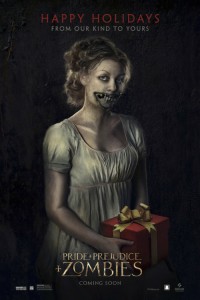 Tis the season of good cheer and festivities, so to wish us a Happy Holidays the folks from Pride and Prejudice and Zombies have released this simple, yet pleasing, Christmassy poster.

Just like the film itself is putting a modern twist on the Austen novel, the poster re-designs a classic image from Pride and Prejudice by adding a zombie effect, but also throwing in a present to celebrate the jolly time of year. What a treat!

Synopsis:
A zombie outbreak has fallen upon the land in this reimagining of Jane Austen’s classic tale of the tangled relationships between lovers from different social classes in 19th century England. Feisty heroine Elizabeth Bennett is a master of martial arts and weaponry and the handsome Mr. Darcy is a fierce zombie killer, yet the epitome of upper class prejudice. As the zombie outbreak intensifies, they must swallow their pride and join forces on the blood-soaked battlefield in order to conquer the undead once and for all.