Pride and Prejudice and Zombies … and a Box Office Smash? 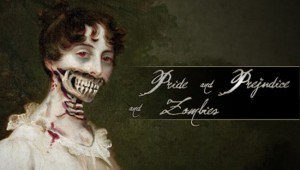 For a while, it seemed like Pride and Prejudice and Zombies was dead in the water after director David O. Russell left the project and lead actress Natalie Portman followed him out the door.

Kill the head and you kill the body, right?

But after a series of cancellations and resurrections, the film was finally made with director Burr Steers (Igby Goes Down, 17 Again) at the helm and actress Lily James (Downton Abbey) in the lead role as Elizabeth Bennet. It opens February 5 (US) and Febuary 11th (UK) and will likely be the top grossing horror movie of 2016.

The film is an adaptation of a book by Seth Grahame-Smith which, in turn, is a mashup of the Jane Austen classic. While the premise of the story – which is simply the insertion of zombies into the otherwise faithful retelling of Pride and Prejudice – seems absurd, the zombification of Austen’s work actually has quite a natural transition. Instead of a love story set during the Napoleonic War, it’s a love story set during the zombie apocalypse – potayto potahto. And our heroine is still subverting gender norms by doing things that are generally considered unwomanly, like carving up the undead with a katana.

This is clearly a movie that doesn’t take itself too seriously. But from what we’ve seen, it’s visually stunning and the cast is a great fit. It’s also coming out at a great time; The Walking Dead has revitalised the zombie apocalypse genre and Downton Abbey has piqued the world’s interest in historical British dramas.

While the book was an overwhelming success, it is likely that the movie will go on to do even better thanks to some of the not so subtle liberties it takes with the source material. The book largely stayed true to the original; aside from an occasional interrupting zombie, the plot remained unchanged – it was still, at heart, a story about the complex and stormy relationship between Bennet and Mr. Darcy.

The movie looks like it will do things a little differently. When it comes to the balance between Austen’s prose and Grahame-Smith’s throes, bank on more swordplay than wordplay.