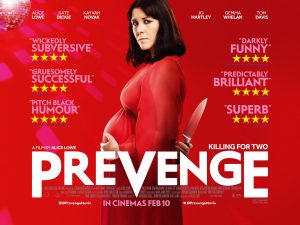 Synopsis:
Heavily pregnant psychopath Ruth (Alice Lowe) embarks on a local killing spree, irradiating a swathe of horrible characters while dealing with the tragedy which kick-started her frenzy.

After appearing in indie/ cult favourites, Sightseers, Aaaaaaaah!, Crackanory and Garth Marenghi’s Darkplace, it seemed only a matter of time before Alice Lowe took her rapport with the twisted and seditious to the director’s chair. Alice’s eye for the salient and off-kilter is evident from the outset of Prevenge (her directorial debut). Whether it be via an arresting Cardiff skyline or a reptile overlapped with a reflection in glass, Lowe crafts captivating images and capably conjures suitable moods to accompany them. Along with her engrossing lead performance as the grief-stricken Ruth, evocative images (of the jaded, urban and wretched) boom as Prevenge’s primary strength and suggest Lowe has a lot more to offer as a director. Sadly, though, Prevenge is not without its defects, most of which reside within its wafer-thin screenplay. Lowe’s script fails to make much of an emotional punch, which is a shame considering the  killer concept at its core. Some scenes seem elongated to simply kill the time, or unravel in a trudging, perfunctory manner. Kill follows kill and with little character or plot development which makes Prevenge burn slowly. This also suggests that, in this instance, Lowe might still be cutting her teeth as a script-writer. 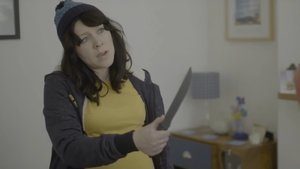 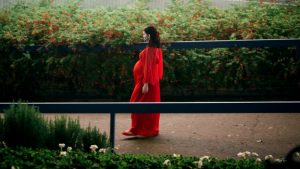 Reasons behind Ruth’s rampage are teased sporadically but don’t resound as plot spinning bombshells. Self-contained ethos’, fitting to some moments, partly echo yet fail to wed with an overriding character arc and don’t quite embellish the film’s key themes. Yet Lowe’s performance and skills as a director are undeniably staggering, illustrated by her ability to tease ticks from the cast, along with her aforementioned eye for the sublime. As an actress, she loses herself in Ruth’s spiralling madness, imperceptibly emphasised by her vacant, inward gaze. Meanwhile, the lecherous sods who get in Alice’s way are taken out accordingly but in her own time. Oafish blokes take the guise of a randy pet-store owner and Neanderthal DJ and make for the most vibrant murders and not just gore-wise. It’s within its finer niceties where Prevenge finds pith. Ruth being collared mid-butcher by a relation of the deceased, a bumbling kitchen sink fist fight, ruined job interview culminating in bloodshed, and scenes featuring Ruth being examined by her midwife (Jo Hartley) while leaking scraps of madness, are all  moments which emboss the too slender story. These lead to an entrancing, Lynchian, dreamlike finale which sees Ruth in red Halloween attire and scary skull make-up. 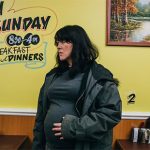 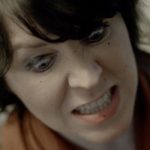 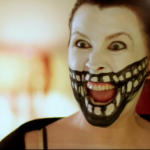 Ruth’s unborn baby manifests in her mind via a candid, childlike voice-over which acts as her death splurge instigator, while also suggesting a supernatural presence could be at the heart of her psycho skirmish. As well as the demon foetus, a flash cut montage of disturbing visuals mends well with the violence and black and white imagery to enforce horror. Ultimately though, Prevenge resounds like a modish/ chic spin on a 70s grindhouse/low budget 80s action flick, or a social realist/ kitchen sink blood-bath with a severed tongue in its cheek. A retro/ electro score (by Toydrum) enforces this throughout while also arousing urban/ hip connotations. The story also partly recalls the oeuvre of Michael Winner (gulp), particularly Death Wish, Parting Shots and Dirty Weekend, with comparable notions and kill loop structures, as Alice slaughters sods en masse. But Prevenge provides a more interesting spin on the bog-standard revenge flick by way of its protagonist, her initially unspoken motive and imaginative portrayal of a character gliding off the rails. Lowe fashions Prevenge within the Warp Film style/ Western Edge MO and hipster/ chic subculture which makes for a unique/ contradictory twist on a recently underused concept. While it might not satisfy those hoping for Death Wish 6 (just me probably), Lowe gives a respectable stab at providing something similar.