Prepare to be Haunted; Ghost Stories Arrives on Blu-ray this September 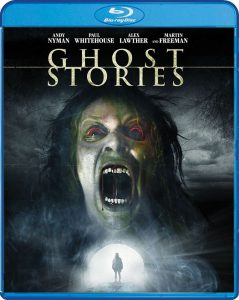 One of this year’s best horror films will be available to buy when Ghost Stories is released on Blu-ray on 4th September. Scream Factory is partnering with IFC Midnight to make this possible.

In the film, Andy Nyman reprises his role from the Olivier-nominated play, playing psychologist and sceptic Professor Goodman, who has his beliefs tested when he stumbles across three files detailing real-life hauntings. Also starring Martin Freeman, Alex Lawther and Paul Whitehouse, Ghost Stories is a trippy, mind-boggling and terrifying feature film. If you missed it in cinemas, then now’s your chance to catch it in your own home.

Synopsis:
Phillip Goodman, professor of psychology, arch-sceptic, the one-man ‘belief buster’ – has his rationality tested to the hilt when he receives a letter apparently from beyond the grave. His mentor Charles Cameron, the ‘original’ TV parapsychologist went missing fifteen years before, presumed dead and yet now he writes to Goodman saying that the pair must meet. Cameron, it seems, is still very much alive. And he needs Goodman to find a rational explanation for three stories that have shaken Cameron to his core. As Goodman investigates, he meets three haunted people, each with a tale more frightening, uncanny and inexplicable than the last.

Be sure to catch Ghost Stories on 4th September. You won’t regret it.