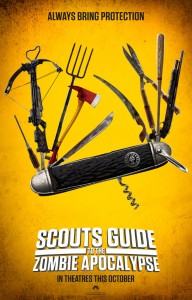 If you think you’ve seen all that zombies have to offer, then think again. In this trailer for Scouts Guide to the Zombie Apocalypse we have undead felines and they are angry. In a similar fashion to Zombieland, the film seems to be working down a check list of rules to help you survive a zombie invasion. The tone definitely feels a lot like Ruben Fleischer’s film and hopefully that won’t be a bad thing. There’s always room for another zom-com and if Scout’s Guide to the Zombie Apocalypse can bring something new to the table, then I’m definitely in.

Take a look at the trailer and poster below, which reminds us to always bring protection and shows a much deadlier version of a multi-tooled knife. I doubt you’ll manage to fit that in your pocket, though.

Previously titled Scouts vs Zombies, Scouts Guide to the Zombie Apocalypse will arrive in American cinemas on October 30th and in the UK on November 27th.