Prepare for Annihilation on Blu-ray this May

Prepare for Annihilation. If you were unable to catch the film in cinemas – like us in the UK – and are without Netflix, then you’ll be glad to know that you’ll be able to nab Annihilation on DVD and Blu-ray on 29th May 2018. 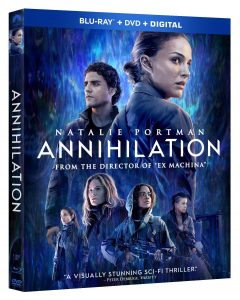 Ignore the dreadful cover art that makes it look like a generic action movie, rather than the complex and thought-provoking sci-fi that it definitely is.

Best Buy will also be releasing the film exclusively on 4K, which Annihilation is definitely – surely -worth watching in.

Based on the novel by Jeff Vandermeer, Annihilation follows an all-female team as they venture into the Shimmer; a mysterious quarantine zone where no one returns from. Not fully, anyway.

It’s a mighty impressive story and the novel is a definitely must if you enjoyed the film, as it offers even more mind-fuckery. Excuse my French.