Prepare for Disaster with the Geostorm Trailer

The first trailer has been released for Geostorm and, oh wow, it’s quite something. It looks like it could be worse than Independence Day: Resurgence, in terms of how ridiculous and pointless it seems.

Gerard Butler….Andy Garcia… What on earth are you doing here?

Geostorm follows a series of unnatural disasters that threaten to put an end to the planet as we know it. The trailer shows complete hell breaking loose and even though it’s completely ludicrous, you have to give the film credit for committing to its preposterous premise and expectedly questionable execution. 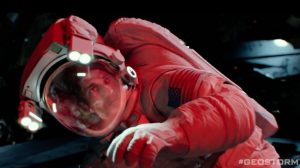 Synopsis:
After an unprecedented series of natural disasters threatened the planet, the world’s leaders came together to create an intricate network of satellites to control the global climate and keep everyone safe. But now, something has gone wrong—the system built to protect the Earth is attacking it, and it’s a race against the clock to uncover the real threat before a worldwide geostorm wipes out everything…and everyone along with it.

Geostorm additionally stars Jim Sturgess, Abbie Cornish, Alexandra Maria Lara, Ed Haris and Daniel Wu. Be sure to check out the horror show when it is released in a surprisingly fitting spot this Halloween on 20th October.