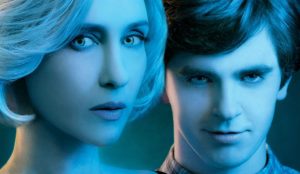 A&E has announced a premiere date for the fifth and final season of their hit show Bates Motel. Beginning on February 20th, season 5 will take the narrative, and Norman’s psychosis, up to the re-imagined events originally depicted in Psycho back in 1960.

As revealed at last July’s San Diego Comic-Con, pop star Rihanna is joining the cast as Marion Crane, a role made famous by Janet Leigh in Hitchcock’s classic shocker. Executive producers Carlton Cuse and Kerry Ehrin said at the event: “We wanted to thrust the iconic role into a contemporary spotlight and redefine it in a meaningful and exciting new way. We also heard Rihanna was a fan of the show, and we were huge fans of hers, so it was the perfect collision of creativity and fate.”

While we all know the brutal fate that befell Marion Crane in her original incarnation, Cuse told EW that the new season will bring an entirely new take on events. “We are going to meet Marion Crane, but what we don’t want to do is create the impression that we’re redoing the movie because we’re not at all. She’s a very different person in the movie and her story plays out in a different way,” he assures fans.