While things have gone a little quiet of late with regards to Shane Black’s upcoming sequel/reboot The Predator, 20th Century Fox struck us over the weekend with this cool piece of animated art for the film. In the motion poster, unveiled on the Predator Official Fan App, lightening forks to form a profile of the titular alien. It’s pretty badass.

A more-or-less direct, 30-years-later sequel to 1987 action horror Predator, the film has been confirmed as having a suburban setting, and is very much expected to be rated R, with Black having previously saying that, “… just to be clear… PG-13 is for pussies. Spines bleed… a lot.”

Black – who co-starred alongside Arnold Schwarzenegger and Carl Weathers as Rick Hawkins in the original – is directing from a script by The Monster Squad/Night of the Creeps director Fred Dekker, while John Davis, Joel Silver, and Lawrence Gordon — who produced the original — are on producing duties. 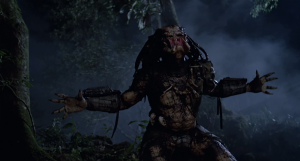