The Predator May Have Just Been Cast! 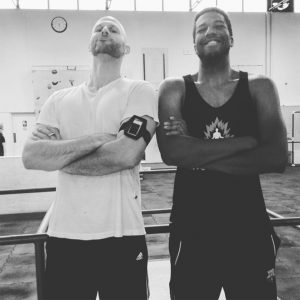 With filming on Shane Black’s The Predator due to start this month, it seems the titular alien may have been cast. While not usually renowned for being the first on the scene with reliable information, IMDb have added stuntman Kyle Strauts to the listed cast and, yep indeedy, he’s down as playing ‘Predator’. The towering Strauts (who stands at 6’9”), who worked on The Cabin in the Woods, is himself from Vancouver, where The Predator is due to be shot.

While not yet listed on IMDb, it is also being reported that fellow stunt performer Brian A. Prince (Captain America: Civil War) may also be donning a Predator suit. The 6’10” Prince (pictured with Strauts) has said on his social media accounts that he is currently in Vancouver about to film a secret project, which can only really be one thing, right?

Additionally, rumours are circulating that the film will feature a new Predator who will dwarf those we’ve seen before. If the whispers are to be believed, the new Predator will stand somewhere near 10-feet tall! I would advise we take this one with a pinch of salt for now however.

Black – who played Hawkins in the 1987 original – will direct from a script by The Monster Squad and Night of the Creeps director Fred Dekker. Fox have set a release date of February 9th, 2018.