Praise Violence in the First Trailer for AMC’s Preacher 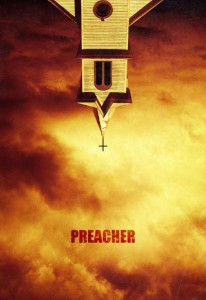 AMC have now released a full trailer for their upcoming series adaptation of the comic Preacher, created by Garth Ennis and Steve Dillon. Going by the same name, Preacher will follow Jesse Custer played by Dominic Cooper (The Devil’s Double, Dracula Untold) who is a supernatural preacher that abandoned his faith only to become paired with an entity called Genesis; both an angel and a demon. Along with his ex-girlfriend Tulip (Ruth Negga) and an Irish vampire (Joseph Gilgun) he sets out to, literally, find God to discover why he has abandoned his heavenly duties.

Sam Catlin will be the showrunner and he is the writer behind the first episode of the show. Seth Rogen, Evan Goldberg and Neal Moritz are producing, and of course, the program will be brought to you by AMC; the channel behind modern classic shows such as Breaking Bad and The Walking Dead.

You can check out the trailer for the show below; the heated Texan landscape looks like a great backdrop to the sizzling heat that is bubbling beneath the surface of the Preacher’s mind. We know that he is willing to get up to no good, but just how far he’ll go is the mystery. We’re definitely looking forward to the release of this one, and it is set to premiere in mid-2016, so keep a look-out for Preacher.