The Poster for Colossal is Pretty in Pink 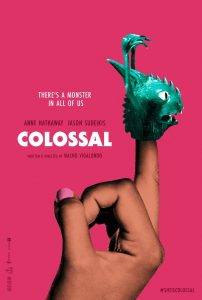 A pretty in pink poster for Nacho Vigalondo’s (Timecrimes, ABCs of Death) monster movie has crashed online and further shows how the film is aiming to twist audience expectations. Colossal follows a woman (Anne Hathaway) who discovers that she a connection to a monster that is ravaging South Korea and when events start to escalate, she has to determine why she is suddenly so important to the world’s fate.

The trailer for Colossal shows the film’s comedic side and the poster, again, channels a similar level of playfulness as a rubber monster sits on a woman’s raised middle finger. Colossal sounds a like a risky and interesting take on the monster movie, so we’re definitely excited to see what the film offers.