This Poster for The Channel is Bloody, Religious 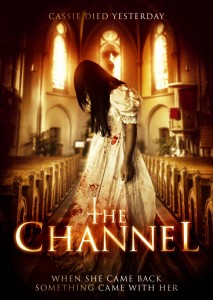 A poster has been unveiled for the supernatural horror film The Channel which is set to follow a woman who returns from a near-death experience with something (or someone?) evil in tow. The poster shows her in a church presumably safe, but a frightening face is at the stained glass windows.

Synopsis:
Following a near-death experience in a car crash, teenager Cassie Stevens finds herself haunted by a shadowy figure…something which has apparently followed her back from the other side of death. As these visions escalate, Cassie’s sanity teeters on a breakdown and her only hope is a sceptical priest, who himself harbours doubts about her sanity.  Will she break free from the living nightmare that torments her, or will she succumb to the darkness that seeks her soul for cheating death?

You can check out the trailer below, which has a couple of bold scares that should give you a bit of a fright. As with all horror films with religious connotations, there’s a couple of priests involved and discussions of evil, mercy and the Lord soon get underway. There’s also a lot of fire, a Ouija board and the clutching of a rosary. This one has definitely ticked off 99% of the items that typically feature in a horror film.

If this channel sounds like one you won’t skip over, then be sure to look out for The Channel when it gets its limited theatrical release on 29th April.