The Poster for Better Watch Out is an Ugly Christmas Sweater 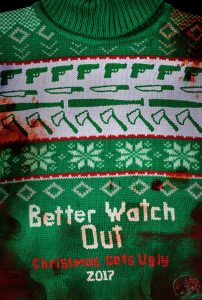 In the film, Ashley, a babysitter, must defend the home of Deandra and Robert Lerner as strangers start breaking into the house. However, they soon realise this is not a typical break-in. Obviously, it’s all set around the Festive period, so that gives the film an extra layer of entertainment.

Better Watch Out stars Olivia DeJonge, Virginia Madsen, Levi Miller and Patrick Warburton. The film will be released in the USA on 6th October and in the UK on 8th December 2017.