Poster Arrives for William Friedkin’s The Devil and Father Amorth

Have you ever wanted to see a real Exorcist tackle a real Exorcism? Well, now’s your chance. William Friedkin, director of the iconic The Exorcist, is to return to his documentary roots with The Devil and Father Amorth, and you can check out the poster below. 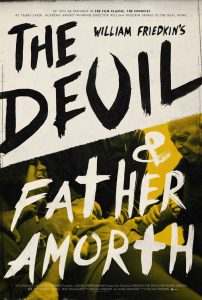 The documentary will follow 91-year old Father Gabriele Amorth, the official Exorcist of the Diocese of Rome, as he makes a harrowing house call. The documentary will also look into the history of demonic lore and provide a modern insight into a medieval belief.

It sounds extremely interesting and, honestly, quite terrifying. Watching a fake exorcism in a fictional film is one thing, but watching a real one is an entirely different kettle of fish I’m not sure I want to witness.