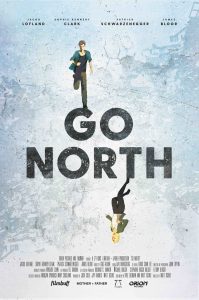 The post-apocalyptic coming-of-age tale Go North is set to hit limited cinemas this 13th January and we have the trailer for you below. The film comes from writer-director Matthew Ogens and co-writer Kyle Lierman. Ogens is most widely known for his documentary features and Go North marks his narrative debut.

The film looks to have created a barren and striking post-apocalyptic world that is reminiscent of Clare Carre’s Embers and the ‘80s horror-actioner Dead End Drive-In. When a mysterious catastrophe wipes out much of the population, a community with no adults is led by a group of athletic jocks. Tired of the situation, two teenagers embark on a journey north in the hope of finding a more peaceful existence.

Go North has been described as a modern-day Lord of the Flies and from the trailer it looks like a darker, more intense spin on the recent YA franchise The Maze Runner. If this sounds like your cup of tea, you’ll be glad to know that the film will be released on 13th January in limited cinemas in the USA, as well as on VOD nationwide.