Synopsis:
An English spy returns home to Berlin after his latest assignment. Upon arrival, his relationship with his wife starts to crumble instantaneously. As his paranoia begins to grow, he starts to discover that it’s much more than a simple matter of infidelity.

One might have presumptions regarding the content of Andrzej Zulawski’s 1981 film Possession, just from the title alone.  Images of demonic forces and the supernatural struggle between good and evil might be the first images to come to mind. However, nothing could be farther from that assumption. Reaching far beyond any and all expectations, it delves into the darkest parts of the human psyche, and leaves them contorted and misshapen. Heavily edited upon release, and stripped of many of its bizarre facets, its original form was lost for years. Recently, versions containing Zulawski’s original vision have been restored, so it can now be viewed in its intended format. To describe Possession as just a horror film would be a gross understatement, as it’s an intricate work of art, which manages to merge many elements into one medium. 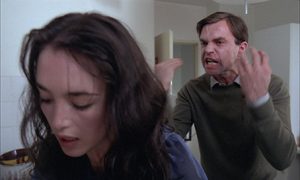 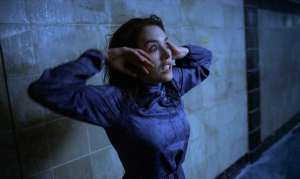 Echoing both Repulsion and Scenes From A Marriage, Possession manages to exist in a world unto itself. It looms like a shadow, and breathes like a monster hiding beneath the floorboards. Zulawski sets his narrative in the bleak world of cold-war era Berlin. A trait not lost in the film, as it deals heavily with separation and the longing for unification. At the same time, it incorporates elements of both the metaphysical and Lovecraftian to weave a story about the complexity and darker side of human relationships.

The primary focus is a couple, Mark and Anna, portrayed by Sam Neil and Isabelle Adjani. Both of them undoubtedly give some of the greatest performances of their careers. They both manage to walk the thin line between insanity and utter despair. Neil’s ability to go from jilted husband at the beginning and arc into a man who transcends into an elevated state of being is nothing short of remarkable. Running parallel to Mark’s gradual evolution is the award winning performance from Adjani. Rivaling Catherine Deneuve’s role in Repulsion as someone driven to the brink of psychosis, she manages to breathe life into her character, and portray Anna in a way that’s almost terrifying in its exhibition. The chemistry between to two of them is both tumultuous, and highly volatile. At times hinting at abuse, sadomasochism, and infidelity, their crumbling relationship serves as the primary vehicle that drives the story forward into the abyss with no turning back. Part of what makes Possession such a powerful film is the journey into madness we’re a part of. 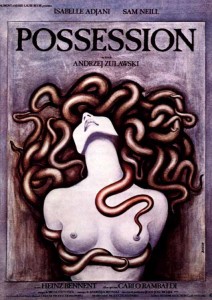 Accompanying relationships and transcendent beings is a distinctive look and an impeccable attention to detail and imagery. Using very drab colors that reflect the urban location are present throughout, as well as slight of hand use of color contrast and saturation to catch the naked eye. The use of wide photography and fluid camera movements give it a voyeuristic quality, much like peering into a fishbowl. Images of guards that appear atop the Berlin wall from time to time reinforce the idea of being watched.

Zulawski tragically passed away in February of 2016. Possession remains his most enduring work, and one that many others will be measured against for decades to come.