Synopsis:
A student takes the opportunity to delve in to the world of exorcisms for a theology project and offers to be possessed via a live stream online. 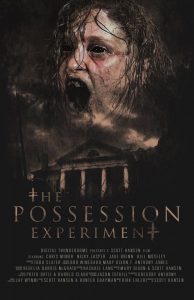 The Possession Experiment starts strongly and sets a dark, grimy scene as its location for a recorded possession of a young woman. With obvious similarities to the ever elephant in the room The Exorcist, The Possession Experiment’s possessed hurls abuse at a priest – played by none other than Bill Moseley – in a masculine, echoed tone that is far too familiar. Her face is ripped, her eyes are black and she’s drenched in blood and sweat; it’s an effortlessly strong moment and it is made all the more terrifying by the film’s low-key lighting and contrasting which gives the visuals an icky texture to heighten the drama. It’s an impressive start, but sadly the film never again reaches these heights, despite its clear intentions to do something new with the tired possession genre.

Commendation has to go to The Possession Experiment, because there is a drive to do something new here. The idea of a young man’s obsession with exorcisms leading him to volunteer to be possessed is an instantly intriguing concept and one I was keen to see executed. Unfortunately, the execution is where the film begins to stumble. After the intense and exciting start that was filled with promise, we are taken to a classroom where the change in tone and style is striking. Gone are the creative visuals and stylish edge; replaced by a dull grey-blue colour palette and a series of clichés. Our protagonist Brandon shares his bedroom with your classic jock type character who says “pussy” a lot, the rain pours relentlessly outside and a POV camera shot suggests something sinister is lurking in the bedroom. Uh oh, cheese alert.

It doesn’t end there, because Brandon soon meets his partner for his exorcism project. He’s the comedic relief; and a smoker who looks like he’s never smoked in his life. Every time he lights up becomes a distraction and reminder of how amateur The Possession Experiment is. With a little more of that initial creativity and a stronger cast; this could have been something spectacular. Instead, it’s a watchable, but flawed possession story with hints of promise and potential. It never quite strikes the balance between its core drive to be different and its ability to do so, and it’s disappointing because there is a great film beneath the clichés and over-complication.

In terms of over-complication, The Possession Experiment tries to juggle too much within its story. Writer-editor-cinematographer-director (that alone is impressive) Scott B. Hansen begins to transfer his juggling abilities to the story which tackles too many different ideas. The base of the film could have focused on Brandon’s interest in possessions and exorcisms, with his drive to prove their legitimacy leading him to want to be possessed himself. In turn, his curiosity what be his demise, because we all know what happens to the cat. It’s a simple concept, but it could have been effective. There is a nice touch with Brandon’s need to document the possession live online, because that cements the story in a very authentic reality. In this world of Facebook Live, YouTube and Snapchat, that’s exactly what a young student of today would do. However, scripted in to the story is an unnecessary twist that is eventually shoe-horned in just over the half-way mark. This new narrative strand poses the idea that possession can be inherited, which admittedly, is a great little idea, but one that doesn’t feel at home within this narrative.

All in all, The Possession Experiment is a fairly solid film, and has a few touches that are very impressive. The first few scenes are particularly great, but it’s a shame that the remainder of the film can’t maintain the creativity present in those opening few minutes. That being said, the concept alone warrants enough for this film to be watched and there is a refreshing amount of unpredictability present, which is rare for a modern day tale about possession.