POOKA RETURNS TO HULU’S INTO THE DARK 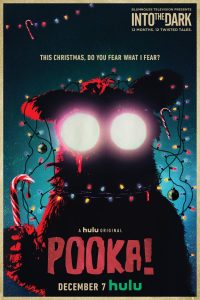 Hulu and Blumhouse’s holiday-themed anthology series Into the Dark has been a bit of a mixed bag, but one episode that most fans can agree on is Pooka! Directed by Nacho Vigalondo, the episode premiered in December 2018 and saw an unemployed actor (Nyasha Hatendi) tasked with portraying Pooka, a hit new holiday toy. But the costume soon started having strange effects on him…

Turns out you can’t keep Pooka at bay for long. The character will return this April in the episode Into the Dark: Pooka Lives, directed by Alejandro Brugués (Juan of the Dead, ABCs of Death 2) and written by Ryan Copple.

The plot will follow a group of high school friends who are now in the 30s. After writing their own Pooka-themed Creepypastas for fun, they’re shocked when the stories become viral hits—manifesting more versions of the murderous creature.